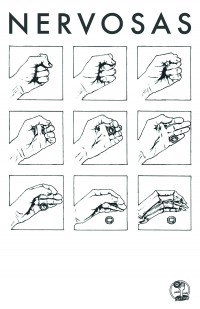 If you're familiar with the previous output from Nervosas, you probably weren't too surprised when the band joined the Dirtnap Records roster. Their straightfoward, melodic punk, tinged with just a hint of gothy darkness, fits right in with a significant swath of the label's offerings, so it seemed a perfect pairing for the band's second self-titled LP (the first was released on Let's Pretend Records in 2013). The record showcases the band doing what they do best, though in some ways it fails to live up to the promise of previous work, and also fails to mark a significant step forward for the band's sound.

As a listener, if you've followed this band for a while, then you're familiar with their two full-length demos, Ardentes and Descension. Both are prime examples of Nervosas at the top of their game, blending catchy choruses and hooks with darker vocals that sound urgent through a veil of melancholy. It's this tension between the lighter and darker elements of the band that makes the songs stand out from the rest of the crowd. Album opener "Moral Panic" replicates this recipe well, though as the record continues, it sounds like the band may have forgotten and ingredient here or there. That's not to say the record doesn't remain delicious -- it does -- but it's not the best batch this band has produced.

So what's missing? For starters, the hooks just don't grab the listener with the same power they have on previous efforts. Thinking back on tracks from Ardentes, like "Incinerator" and "Badcop," it's hard to find anything on this new, self-titled album that matches up in terms of catchiness. That said, there is a bit more of an edge to many of the tracks on this record, so if the band is looking to travel a bit further in that direction, they're doing so successfully.

Overall, Nervosas' first Dirtnap release is a solid slab that accurately represents the band's sound, even if it doesn't feature the band's best work. It's not an uncommon scenario for a band that's done good things on smaller labels. Expectations are always high when they step up to a bigger label, and that means they sometimes fail to meet them even if they've done nothing wrong. That's likely the case here. Even if this isn't the best document of Nervosas' work, it shouldn't be held against them.