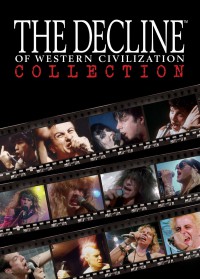 The Decline of Western Civilization Collection 📀 (2015)

It took some time, but the Decline of Western Civilization trilogy, filmmaker Penelope Spheerisâ€™ seminal series on Los Angeles rock music over the years, has finally been issued in a 4-disc box set via Shout! Factory. Fans of punk, metal and rock â€˜nâ€™ roll in general will find something of interest in each of the films, which range in scope from the comedic (Part II: The Metal Years) to the tragic (Part III).

The original remains the roughest of the three, and reasonably so. Spheeris shot the film on a minimal budget, aided by a minimal crew, and ultimately made a minimal amount of edits. While the DVD offers plenty of extended interviews, the majority of what Spheeris shot ended up in the grainy film. Aesthetically, itâ€™s as punk rock as its subjects. Vintage footage of bands like X, Black Flag and Circle Jerks hold up well, as do their interviews. I never knew the Black Flag guys were so funny. Exene Cervenka and John Doe of X likewise strike a balance between humorous drunk anecdotes and riffing on religion and politics. Even when theyâ€™re fall down drunk, they still sound smarter than everyone else in the entire trilogy. X is my favorite California punk band, and this movie makes me love them more.

While much has been made about the bands that bookend the film, Germs and Fear, Decline goes beyond that style of punk to also showcase LAâ€™s roots by discussing early DIY venues and channels. Spheeris affords screen time for Alice Bag Band and Catholic Discipline, featuring Slash scribe Claude Bessy, both of whom would arguably be considered post-punk if theyâ€™d formed anywhere else. While their songs are slower and dronier compared to the Orange County hardcore featured throughout, they still serve as an excellent pallet cleanser.

Oddly enough, itâ€™s Germs and Fear that hold up probably the worst. Fear always made their money by courting controversy, but their incessant homophobic humor wears thin quickly. That said, they were meant to offend audiences in 1980, so maybe I shouldnâ€™t be surprised in 2015. Germs, meanwhile, are a total train wreck. Frontman Darby Crash canâ€™t be bothered to sing into the mic during live footage, and drops casually racist remarks in interviews. Worse still is Pat Smear, who discusses belting women in the face at shows with no sign of repentance. We crucified Ben Weasel for less.

But thatâ€™s part of what makes each of the Decline films effective. Spheeris never seems to judge her subjects, although she does occasionally check to make sure people fully understand the consequences of their actions. This is especially true for Part II: The Metal Years. Just a few years prior, Spheeris turned down the directorâ€™s chair for This is Spinal Tap, only to wind up making a film just as critical and hilarious. By the late â€™80s, punk had practically died off in LA, with metal replacing it as the sound of rebellion. Or faux rebellion, at least. Metal Years is the only film in the trilogy that doesnâ€™t discuss punk. Itâ€™s the only film where its subjects are dangerously confident about getting rich and famous. Itâ€™s the only documentary of the three that could be called a comedy.

This is perhaps enhanced by the passage of time. Metal Years was always ridiculous, but those â€™80s fashionsâ€”big hair, too much makeupâ€”enhance that aspect ten-fold. To boot, Spheeris and her daughter, Anna Fox, did a phenomenal job digitally restoring the footage. Part I was shot on the cheap, and looks like it, but Part II boasts crisp imagery and shockingly clear audio. The live footage could be studio-quality.

The later Decline films make a point of connecting historical dots. Part II looks at glam metalâ€™s hedonistic tendencies, but brings in â€™70s hard rockers like Alice Cooper, Kiss and Aerosmith to talk about where all that drug and alcohol abuse ends up. Some of the subjects are funny (Ozzy Osbourne, Poison, but mostly a very drunk Chris Holmes from W.A.S.P., who gets interviewed in a pool, in front of his mother). Some are so self-serious about such awful music (Odinâ€™s promises to be bigger than Led Zeppelin and the Doors are mostly sad... but also joyously unironic).

Tonally the film is all over the place. A striptease competition judged by hair metallers London segues into the totes brooding Megadeth, whose â€œIn My Darkest Hourâ€ is only live performance worth rewatching. Metal Years is ridiculous, but at least least it scored Spheeris Wayneâ€™s World.

Wayneâ€™s World, and a handful of commercial comedies afterward, allowed Spheeris to self-fund Part III, which is the least seen installment despite being the best of the three. Gone is the bawdy spectacle of glam metal; here Spheeris interviews gutterpunks, drunks descended from drunks whoâ€™d rather live on the street than see their abusive parents again. Itâ€™s a very dark film, and the least concerned with music of the three documentaries, although Naked Aggression and the Resistance do get in compelling performances. In Metal Years, everyone is convinced theyâ€™ll become rock stars. In Part III, everyone is convinced theyâ€™ll be dead in five years.

Spheeris again brings in older musicians (Flea, Keith Morris, Rick Wilder of the Mau-Maus) to discuss the hardships of drug abuse. Morris starts off lamenting that punk was better in his youth, which sounds like clichÃ© old man crumbling until he breaks down the economic factors that made â€™90s LA so much worse and you realize, shit, heâ€™s right. The kids are fucked.

The musician interviews are brief; most of the filmâ€™s 86-minute running time is dedicated to fans of not just punk rock, but of the original Decline of Western Civiliation. Kids with nicknames like Squid and Hamburger openly worship Spheeris, to the point that they show no qualms revealing their darkest pasts. These people have nothing to hope for beyond hereditary alcoholism, and the film spirals through layer after soul-crushing layer until it hits a real gut punch of an ending. This is not the Metal Years sequel fans wanted, but it is the one they needed.

Given the nearly 20 years that separate the trilogy, The Decline of Western Civilization Collection might induce emotional whiplash if watched all at once. Plus, each film comes stuffed with bonus content, so it might be worth it to space out viewings anyway. While the commentary tracks are a bit meandering, the extended interviews offer plenty of value. The X and Black Flag intervews are essential viewing. Ozzy Osbourneâ€™s segment is funny, forthcoming and alarming all at once. Panel interviews catch viewers up on how some of the subjects are doing, although thereâ€™s a frustrating lack of information about the gutterpunks themselves. All the same, The Decline of Western Civilization Collection is a riveting experience, building and dispelling myths in equal measure. After decades of hype, itâ€™s rewarding to find out that it really is such an important set of documents.

Self Defense Family: Heaven Is Earth

Mono in Stereo: Long For Yesterday