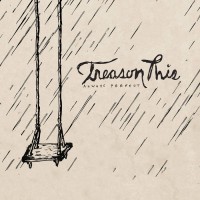 Pop-punk is a delicate thing. Itâ€™s a winning formula with massive appeal when itâ€™s done right. But when a band takes the prescribed genre route, their work ends up sounding generic and uninspired, probably more so than in any other genre. And when a pop-punk band heads the other way -- towards the unusual or experimental -- it tends to have mixed results and often loses most of the appeal that comes with the genre. Iâ€™ve always respected those that take the latter approach: bands like Fireworks or The Front Bottoms are by no means bizarre or even experimental, but they both infuse a heavy helping of unique vision and maturity that separates them from the rest of the pop-punk horde. At their best, Milwaukee, WIâ€™s Treason This are able to find the very elusive "distinctive pop-punk voice." Itâ€™s not on every track of their new EP, but the band shows a certain promise and might have what it takes to rise above the countless pop-punk clones.

Treason This, originally an acoustic duo, debuts as a full band on their Always Perfect EP. The release is anchored by its first single, â€œMoviegoers Dilemma,â€ which is something of a mislead. Itâ€™s a strong standard pop-punk tune with great melody, but does little to showcase the groupâ€™s capabilities as a distinctive voice. â€œI Hate You Please Dieâ€ and â€œA Disgrace to the Deadâ€ are better tracks that are reminiscent of the underappreciated mid-2000s act Rory: catchy and melodic pop-punk with a weird backbone and dramatic edge.

Singer and primary songwriter Michael Inge is the bandâ€™s clear strength. He does the standard high-register pop-punk croon, but it fits, and his strong vocals add an extra dose of pop to the bandâ€™s sound. His voice is something like a more relaxed (or less ridiculously theatrical) Nate Reuss. Although the lyrical content is standard melodramatic pop fare (relationships, tragedy) and the song titles can be a bit hackneyed, his lyrics have the advantage of being meticulous, witty and wordy. His healthy dose of dictionary helps the band not get too weighed down in the clichÃ©d.

A major issue with the EP is that the band doesnâ€™t entirely separate itself from its acoustic origins. Almost half the EP is either acoustic-vocal interlude or full-fledged acoustic numbers. The songs are well done, but they lose some of the momentum gained by the full band tracks. Iâ€™d be willing to guess these softer parts are growing pains and theyâ€™ll probably show up less and less as the band finds its voice. As they grow, itâ€™ll be interesting to see where they take their sound--- hopefully it will be towards the unique sound theyâ€™ve created on a few of this EP's tracks. Either way, if youâ€™re a fan of uber-pop punk, Always Perfect is worth a listen.

The Hotelier: It Never Goes Out [Reissue]