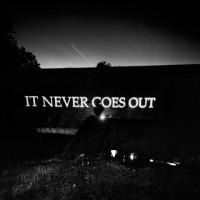 Before the polished masterpiece, Home, Like No Place Is There The Hotelier were The Hotel Year, a band still striving to shape a new and definitive sound. It Never Goes Out is the bandâ€™s debut album that is fast raw punk and melodic emo at itâ€™s finest. The record is finally being rereleased for the first time on CD/LP and fans are excited to add a physical copy of the classic album to their collection.

If The Hotelier were an exotic dish, The Hotel Year is the appetizer that fills you up in the interim, prepping you for the main course. The album doesnâ€™t sound nearly as perfect as their follow up, Home, Like No Place Is There, but itâ€™s not supposed to. The album is raw and rough, giving it its melodic edge.

Melodic punk openers like â€œOur Lives Would Make A Sad, Boring Movieâ€ draws the attention of the listener immediately with a fast compelling intro that leads into the most catchy sing along verse of the record. The album is explosive with appealing verses and strong melodic choruses that carry the album from front to back.

At times, the album sounds like typical pop punk, but what the band offers is much more diverse in itâ€™s influence and originality. The band adds their own personal spin perfected with a much more mature sound than other bands out during the time. The album blends raw melody with fast paced riffs that balances a nice blend of the bandâ€™s emo and melodic punk sound.

â€œWeatheredâ€ is transformative for the band on so many levels. The song marks the unique sound The Hotelier adopted after this record with compelling subject matter and perfect song structure. The songâ€™s build up is extremely powerful and the hook is enough to sing along to over and over again.

Christian Holdenâ€™s vocals arenâ€™t as well developed as they are on their new record but his raw voice in development is an interesting transition that fits well with the edge of the album. Holdenâ€™s lyrics question the bigger picture by the dissecting the small parts of situations. His songwriting is truly unique and adds great visual depth to every song on the album. â€œWe are discouraged to ask questions or to raise a fist. No wonder nobody can tell there's something so much fucking bigger than thisâ€ is just one example of the political and emotional charge behind Holdenâ€™s lyrics. While the topics at times can be juvenile, they are inspected through a unique lens of metaphors and meticulous subjectivity.

â€œTitle Trackâ€ is the bandâ€™s finest closing moment. The melody is reminiscent of '90s rock with a spin of modern day emo/pop punk. The song and the album title are taken from The Smiths and while itâ€™s not uncommon to reference influences; the band adds their own subject matter that daringly compares The Smithsâ€™ lyrics with the theme of â€œTitle Track.â€ â€œIâ€™ll see the world how I want it to be and nothing elseâ€ once again conveys Holdenâ€™s daring lyrical subjectivity.

The re-release of It Never Goes Out is certainly an important one as it marks the start of The Hotelierâ€™s continuous uphill journey. The formative album is a great listen for fans of the band, whether youâ€™ve heard it before or not.

Class of 86: Future On Fire