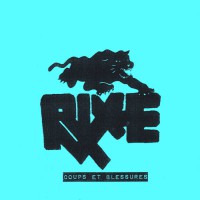 Sometimes you're not aware that something's missing in your life until you experience it and realize what your existence has been lacking. In this case, that missing thing is French Oi. See, you didn't know you were missing it, did you? You'll realize it once you spin Coups & Blessures, the debut 7-inch from Rixe.Â

While it's cliche to suggest that current act brings to mind the glory years of a genre, there are times when it's appropriate, and this is one of those times. The four tracks on Coups & BlessuresÂ would fit right in on any of those dusty old Oi comps that you bought in the '90s to further your punk education. And if you're looking for a point of comparison from those days, the one that springs to mind after only a few minutes of listening is Blitz. That's because the guitars have that low, menacing crunch and the bass a slightly distorted sound, both hallmarks of what Blitz was doing way back in the early '80s. Vocally, there are also similarities, as both bands' lyrics are delivered via a gravelly growl.Â

But make no mistake, Rixe adds their own flourishes, too. One of the most notable is the prevalence of gang vocals across the 7-inch. In fact, instances where the vocals are not delivered by a whole gang of people are few and far between, and while some might consider it overkill, it works quite well. That's largely because the choruses (and verses, for that matter) are so easy to sing along to, regardless of how well you speak French. That's particularly noticeable on "Infatigables," the record's second track and perhaps the best example of the band's approach.

For those tired of derivative bands using Oi as a smokescreen for tough guy silliness, Rixe is refreshing. Oh, sure, the sounds they make are rough and tough, but there's more to it than that, and that's what sets them apart from the rest of the Oi wannabes.

Class of 86: Future On Fire