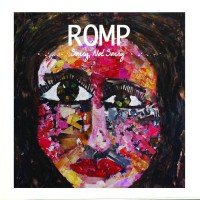 Romp are one of those bands that tell great stories to the soundtrack of indie/pop/alternative rock. Most of Madison Klarer's lyrics hint at personal experiences and are seemingly tailored for those kept within close circles. But what strikes the most is that they paint the story of a city - New Jersey - as one that's confined but so full of life. It's similar to what Geoff Rickly did for Thursday and what so many bands are now doing for Philly. There's a nice air of mystery to her also - inviting, dynamic in delivery and emotionally articulate. Sorry, Not Sorry reflects all of these attributes and ends up being way too short in just four songs but still, you're left impressed with a tight snapshot of what Romp's capable of.

As melodic and shimmery as they get, Romp come off very deliberate and this goes a long way in playing up their pop sensibility. "Drive" opens the record and honestly, feels like an amped up Slingshot Dakota, which is a great thing. It's a breezy jam about rebellion and liberation. Klarer's youth in revolt is the prominent theme on the record and I like how all the songs are well-timed and flow into each other. They feel rigid yet fluid enough to dance in between genres. Her vocals match the musical harmonies remarkably and as the guitars build catchy, infectious rhythms; her tone rises and falls to suit. Nods to Frances Quinlan of Hop Along at times and at others, Romp show tinges of Sweden's indie-poppers, Makthaverskan.

The surfer-rock/punk flavored "If Your Head Gets Any Bigger You'll Float Away" touches on their diversity as it's a much more aggressive and angry track. You feel the sentimentality in Klarer's notes, which the band places strong direction on and why not? Put your strengths in the foreground, right? Very smart move and one that's well done as they incorporate pianos on top of Lucas Dalakian (guitars) and Mitch Gollub's sleek percussion. At times, they feel minimal and fine but when they get a tad more intricate, the replay value just goes up and up. Without spoiling too much, just dive headfirst into the poppy "Portrait". It's a great musical blurb as to what Romp are about and why they're setting themselves up to be one of the next indie acts we're gonna be talking about a lot. And very soon, at that. Highly recommended.

Wavves/Cloud Nothings: No Life For Me