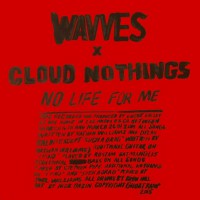 A spontaneous collaboration on a Monday morning is just what the doctor ordered. More so if it's from Cloud Nothings' frontman, Dylan Baldi, and Wavves frontman, Nathan Williams. Each bring something familiar to the table (in terms of musical mindset, songwriting and instrumentation) but when you combine both, there's something there a bit fresher and different. In terms of being one of the more prolific dream-pop records this year, I wouldn't go that far, but it still ranks pretty well up the order. In fact, No Life For Me is more power-pop than anything and should come as no surprise given how both bands/leads have scaled the indie-walls of the last five years.

You've got the strummy Brit-pop blast of "How It's Gonna Go" careening into the shimmery, melodic "Come Down" which all emphasise that this is indeed a summer record. It's a breezy combo that introduces the album, not to mention music that's laid-back, keeping in tandem with the catchy, accessibility of both bands. More so, both leads have a great handle on the lyrics - abstract at times and just plain cheesy at others. But it's the balance they strike that stands out, making such a diverse blast of music. "Nervous" is another flip of the coin with its bass-heavy synth-pop atmosphere shines as it creates an air of anxiety -- but a very wispy one at that.

Each track feels different from the next and really helps move the record along. "No Life For Me" - a subdued singalong jam - ends up being the biggest anthem on the record which is rivalled by "Nothing Hurts". The latter's an electric-acoustic ode to the '80s and '90s which leaves you certain that these guys had fun making the record and wanted to break free of any shackles they may have faced in years gone by as songwriters. It's a record about tribute but also one of experimentation. And at the bottom layer, it's still embedded in subtle hints to the musical styles that Wavves and Cloud Nothings rooted themselves in. I still think one or two tracks could have been cut but overall, this is a random yet pleasant surprise. And one that's definitely sure to please fans of both.