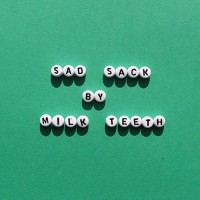 At first glance, Milk Teeth's music reminded me of fellow UK outfit Basement. I heard the first track off this EP, "Vitamins," and figured why not. They seemed to have that grunge revivalist vibe to them. And that they do, but it felt like it wasn't anything out of the ordinary. However, as I explored Sad Sack I found that this is just one dimension to their game. In fact, as each track passes, you hear a band that's a student of rock, tapping into several genres such as emo, punk and post-hardcore as well. In just six tracks, they show a lot of range and I bet that when the record ends, you'll find yourself agreeing with me that this is one of the most diverse albums you'll hear this year.

As the first couple tracks spin, the lyrical setup of Milk Teeth comes into focus. The lyrics rhyme (very '90s-ish) and this establishes a smooth flow for female vocalist/bassist, Becky Blomfeld. Her voice has a lot of depth to it and as she blends in with the band's music, you can sense comparisons coming to bands like Hole, Smashing Pumpkins, Sonic Youth and even, Garbage. She maintains a strong mic presence on "MELON BLADE" which is very much different from the grungy opener mentioned above. It's a hazy, indie-rock jam with an intro that Prawn and Nai Harvest fans could connect with. Their songs don't stick to any formulas though and nicely incorporate varying styles. This track, for example, ends on a riffy layer with spoken word a la Self Defense Family or Troubled Coast. Guitarist, Josh Bannister, marks his entrance here and finds himself in the background shredding vocals. He soon shakes the backup tag though and is thrust to the forefront, giving a very unconventional impetus to the album. But one that works pretty strongly alongside the guitars scraping the amps.

Bannister's throaty presence is much more prominent on "LINDA" and "BAGELS". Interestingly, the former's where the lyrics start to get deeper and to be more precise, darker. Things feel raw, cryptic and abstract. This makes Bannister's transition from being faded in the back to a more shouty role sting that much more. The latter track's a straight-up '90s hard-rock jam which offers a neat duality to what he and Blomfeld accomplish on the first two tracks. The dual-vocal fuelled perfection they create really drive the record but when Bannister cuts loose, you don't find yourself missing the sentimental balance of the duo. In fact, the more he dives into the skramz/screamo realm, the more hard-hitting and impactful Milk Teeth get. But one thing's certain is that no matter who's leading the vocals, the band still manages to feel relevant and legitimate in how they change things up (and they do so with such a non-complex style). What makes this tick even more for me is the subtle, well-composed commentary either vocalist is able to throw at the listener, keeping things much more evocative than so many contemporaries out there. Maybe it's another example of foreigners not giving a fuck and easily willing to subvert Americana rock-isms? Whatever the reason for them switching gears up so frequently, all that matters is the badass outcome.

As Sad Sack ends, I'm sure you're gonna be rummaging online for more of their music. This was such a good introduction to the band for me. To emphasise how well they mix things, they end on a post-hardcore banger in "TRAMPOLINE" which would fit fans of Touche Amore's Is Survived By. As the finale explodes, you're left quickly reaching for the replay button. These six tracks are one of the biggest statements Milk Teeth could have made and when it comes to touring, news of them hitting the road with Pianos Become The Teeth definitely sits well with a PBTT groupie like me. Sign me up for that bill. Milk Teeth's very sombre, very solemn but have a deep-lying energy that's gonna be kicking down doors very soon.