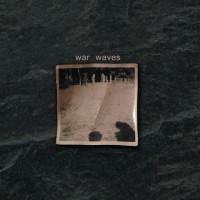 Some albums really kick in on the second listen and this is one of them. War Waves sings often-melancholy pop-punk for mid-summer nights and mid-twenties regrets. One thinks of the Gaslight Anthem, but where Brian Fallon howls about Jersey Casanovas and speeding past faded lovers, War Waves is distinctly British and the lead singer has more of a quiet, everyday croon (which is both good and bad -- it doesn't always have the emotional hold of other pop-punkers like Joyce Manor because of that). The sense of heightened reality and drama though is still there though, and the tunes are hooky and nicely serve that emotional state of epic crushes and every night out being as powerful and tangible as possible. There's a post-punk vibe here too, like the churning guitars on "Trophy Life" for example - in general there are some surprising moments of fuzz amid the gorgeous, clean playing on show here.

The band also smartly avoids Same Song Syndrome, putting the epic, reflective "Fountains" at the perfect point to break the first three tracks' overall mood, then kicking into charging "Hockey Stick" right after. There's some real musical and lyrical ambition throughout here as well, the songwriters going for wit and bittersweet poetry even when they overreach -- "How's my skin supposed to reach you?" doesn't quite make it for example. However, "Hockey Stick" has a last repeated line using "cunt" that just kinda felt a little vitriolic to me - this is the English, who are better at using the c word than anyone else, but the feminist in me cringed deeply. "You reap what you sow/And I've sewn 'forgive me' into my wrists" however is just superb and will be posted on Facebooks everywhere soon. Organ augments the songs too and adds an odd sadness to them - War Waves is one of many angsty pop-punk bands but they have the music to back them.

And the closer "Megamouth" too nicely uses some atmospheric droning feedback and acoustic guitar to build up it's resigned, hopeful ballad. War Waves does some strong well-written pop punk even when leaning on imperfect lyrics and the little touches throughout the album show a creativity and versatility that's surprising. They're quite good but could even be very special, a rare thing in punk these days.