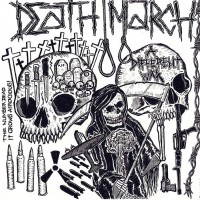 After teaming up with members of Societyâ€™s Parasites and releasing a 7-inch record called Fuck Your Fucking War in 2013, â€œSkinheadâ€ Rob Aston is back to continue the war-themed barrage of bangers with A Different War from his group Death March. Astonâ€™s material has become polarizing in todayâ€™s punk landscape as legions of mid-1990s Rancid fans continue to hate on his love of hip-hop and harsh vocal delivery whenever he teams up or is featured alongside Tim Armstrong and company.

First things first; itâ€™s safe to say no new Aston fans will be won over with A Different War. Fast, ripping hardcore in the vein of early D.R.I. or F-Minus builds the base for these 14 songs pounded out in just 23 minutes. Every song is fast. Every song is heavy. Astonâ€™s trademark growl is as angry as ever with backing helpers coming from guitarist and album producer Freddy Zepeda. The recordâ€™s lyrical content is extremely negative; those in favor of more positive messages should look elsewhere. With song titles along the lines of â€œHatred Personified,â€ â€œDeath By Copâ€ and â€œTheyâ€™re Fucking It Up For Us Allâ€ the overall vibe is not an uplifting one but I feel it works well within this context.

Accompanying the album is a 16-page, black and white lyric booklet that appears to be hand-scrawled by Aston himself. Digital listeners receive the same booklet in PDF. The inclusion of the full-page sized booklet really fits with the old school hardcore feel of the record, so much so that it prompted me to raise the score by half a star. The photocopied images and hand-drawn scribbling give character to each of the songs and entice the listener to follow along with the music.

A Different War is not for everyone. Despite any preconceived judgments you might have about Aston, if you appreciate a quality throwback to minute-long hardcore rippers then this record has the potential to find a place in your collection.

You can check out the record here.