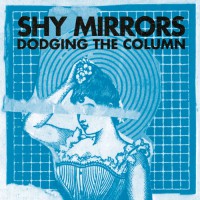 Sweden's one man project Shy Mirrors takes a Guided By Voices approach to garage rock and power pop. Dodging the Column's 28 minutes offers 18 songs with loose structures and truckloads of hooks. Despite the demo-like feel of certain bitss, the album as a whole maintains a surprisingly consistent quality. The songs are fuzzy and warm, with a charming glow courtesy of songwriter Mike Downey's high pitched vocal sneer.

Much like GBV (an obvious influence on display here), Downey creates tracks with a variety of shapes and influences. Songs like "Plastic Skull" ooze along with a power pop strut reminiscent of The Undertones and The Exploding Hearts. "Slimed" offers a subdued acoustic guitar head nodder, with electric guitar ramblings coloring in the simple melody. The tracks here fall somewhere between 45 seconds and 2 and a half minutes, giving the impression that Downey is throwing things at the wall to see what sticks. Some of the song-like snippets, including "Paint the Mission" and "Climb to the Window," are aurally appealing enough to leave you wanting more. Most of the other songs simply end before they begin to drag.

Downey plays all the instruments here, lending the album a ramshackle quality. Combine this with the lo-fi production, and it almost seems like the tracks could fall apart at any moment. They manage to stay together, with catchy melodies and bouncy guitars laying the foundation. The instrumentation is pretty bare, with a handful of songs receiving a smattering of minimalist keyboard work (which reminds me of that first Mind Spiders record from a few years back). The hooks are punchy, with some of the melodies sounding like Superchunk's slower moments (think On the Mouth's "Untied").

Consistency doesn't always mean cohesion, so the songs here tend to simply start and end instead of bouncing off of each other. It's a solid collection of songs, but the only thing putting these tracks into the same context is the lo-fi production. The album does have a certain laid back appeal, however. Though, this could mean it will fly under the radar for most people, unfortunately.

What's Eating Gilbert: That New Sound You're Looking For