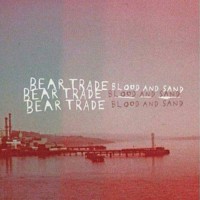 When I first listened to Bear Trade, my immediate thought was â€œthis is like Title Fightâ€. Not the current shoegazey, moody Title Fight, but the early Title Fight of The Last Thing You Forget. I love that compilation, but it's always seemed to me like Title Fight was a little too young and a bit too green behind the ears for the songs to really come together. Iâ€™d always thought the songs on that record would have been twice as good with a little experience and little more skill and I secretly wished they would revisit that sound. Six years later, Bear Tradeâ€™s fulfilled that wish. Blood & Sand sounds like if Title Fightâ€™s earlier stuff was written by four much older northern British punks. Itâ€™s got the same desperate melodic hardcore-ish punk with a slight pop-punk sheen, but much tighter and wiser.

The songs are all at a fast tempo, not quite skate-punk, but on par with the average Iron Chic or Banner Pilot tune. Both bands have similar anthemic approaches and I can hear a little of each in every Bear Trade song. The band's consistent style is the rousing punk burner, complete with fist-raised gang vocals and interesting lead guitar lines. From start the finish, the energy is relentless and the album feels completely cohesive. â€œSon of the Manseâ€ and â€œDolly Mixturesâ€ are especially strong tracks that are infinitely listenable. Even when the band dials it back a bit on â€œPostcardsâ€, the result is still a poignant take on the same format. The band keeps the gears quickly turning through the final track, â€œDead Legâ€, a perfect brief end to the album.

Maybe itâ€™s my American obsession with British accents, but the hard Sunderland accent (is that a thing?) makes the album all the more delightful and engaging. Though the vocals arenâ€™t as quite as gruff as, say, Banner Pilot, the accent adds a touch of toughness and despair that American vocals just canâ€™t seem to provide without straining. Even a line like â€œyou have my heartâ€ on the track â€œNice Bootsâ€ sounds desperate and emotional.

Itâ€™s a shame these guys arenâ€™t playing the Fest this year. Theyâ€™d surely be a crowd-pleaser. Donâ€™t overlook Bear Trade, tucked away in Northern England; theyâ€™ve got exciting tunes that are sure to satisfy punk fans anywhere.

Make Do And Mend: Don't Be Long