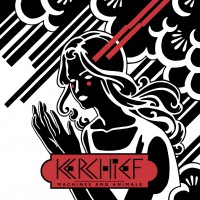 On their debut album, Machines and Animals, Kerchief takes alternative rock back to the mid-'90s. This is to say, their sound is truly reminiscent of an era when bands werenâ€™t so much worried about fitting into a genre. But, were more concerned with writing great songs and playing them for whoever wanted to listen. Chief songstress for Kerchief keeps this concept alive throughout this album as she borrows from numerous artists and genres to create an album that sounds wholly original but also hair and air of nostalgia to it as well.

Throughout the album, you get the sense of roots rock being the base of this album. This isnâ€™t to say it sounds like The Black Crowes or White Stripes, but these songs were written around a guitar riff that supports the vocal as much as the vocal supports the riff. The best part is this is never overthought but always sounds fluid and natural. This is most apparent on the albums third track, â€œCaught Up,â€ which opens with a guitar riff that owes something to The Beatles. It so simple and catchy that it carries you through the rest of the song, which is simply just a love song that doesnâ€™t get overwrought with being a love song nor does it lose itself in pretension at the other end of the spectrum.

The band keeps this feeling going throughout the entirety of the release. With other tracks such as â€œMilk and Honey,â€ â€œYou and Iâ€ and â€œReady to Moveâ€ leading the pack. One of the things that keeps all of these songs interesting, is the band understands the importance of space and dynamics when writing songs. There are bands that play mile a minute punk at full volume across the entirety of an album, and I love it. But, when a band starts slowing things down, the attention to song structure doesnâ€™t become more important â€¦ a lack of it simply becomes more noticeable.

This is a great summer album for driving home from a show or hanging out with friends. While it can be quiet and contemplative, everything on here is great alternative rock in that brings to mind Liz Phair with a Beatles heavy roots influence, and just a touch of garage rock from the late 20th century. All in all, itâ€™s an album you come back to because the song get stuck in your brain. Sometimes you need a Radiohead album or to listen to Fucked Up, but sometimes you just want a good alternative rock album to get you through the day. This is perfect for that.