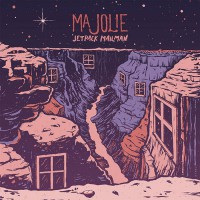 Ma Jolie have grown from strength to strength with each release. 2012's ...Compared to Giants was a full-fledged assault of gritty pop-punk that never let up. It was fierce, breathless and clearly a band looking to make a statement right out the batting cages. Polars, which came just over a year later, geared down a bit, taking them for a more indie/melodic spin and showed a work in progress. It was all about fine tuning and refining a band that showed great technical skill but still seemed flustered and too frantic for their own good. What became obvious with the progression of Ma Jolie after these two albums was that they were becoming more aggressive and focused on honing their voice, which saw them trim into a three-piece along the way - a move that's worked wonders as evidenced on this record. If you're into bands like Bathurst, Success and Red City Radio, this brand of gruff-vocal punk is just for you!

In terms of shaping a formative identity and owning a sound, it looks like the patience has paid off and the wait's been well worth it. Their older albums were rough around the edges but showed enormous potential, which Jetpack Mailman delivers on. This four-track EP finds the band with more direction and a sound to call their own, living up to said potential while clearly learning from their extensive touring alongside bands like Motion City Soundtrack, Iron Chic and modern ass-kickers Choke Up. Off the bat, things are louder, faster and heavier with "Tired Life," which also shows a sensible shift in songwriting -- one that's mature and much more open. It's here that you see the transition into the new emerge as the track swings from a skate/thrash punk opening setting into a bass-dragging post-hardcore mood, allowing the band to pause and take deep breaths -- something that only started cropping up in cameos on their last record.

"Ego Tourism" continues in this vein of letting the tracks flow with more space. It has a style that's reminiscent of Restorations or their punk-equivalent in Typesetter with an M.O. that's richer and much more expansive than anything in Ma Jolie's resume. "Pittsburgh" then steps in to up the punk and transport the listener back to the band's more anthemic, shout-along roots; signalling that they haven't tossed the old tricks away. As the album races to an abrupt end, you'll definitely look back to the comparisons which have been made in the past. Lifetime and Bear Vs. Shark are some that'll surely pop back up but as you jog your memory, if you're someone who's taken in all of Ma Jolie's work, ultimately, you'd be able to recognize that Jetpack Mailman is Ma Jolie letting go of influences and doing their own thing. It's the best step they could make in their musical evolution and teases a big future ahead.