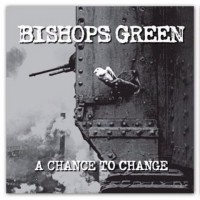 This is stating the obvious, but Vancouver is a decent distance away from London, England. Obvious point number 2: 1978 is a far cry from 2015. Yet, Bishops Green do their best to shorten that distance and decrease the time gap between the years on their latest album A Chance to Change. The band plays a classic strain of Street Punk, drawing influences from the Oi! stomp of Cock Sparrer and the gritty growl of Sham 69.

The entirety of album opener "Lost Generation" sustains the atmosphere of a street gang shout-along. It's not all beer bottle smashes and romping street stompers, however. "We Got Nothing" takes the form and pace of a funeral-like march, offering a welcome respite from the spit addled resistance anthems thrown around throughout A Chance to Change. "Government Lies" marries Oi! drenched politics with a catchy, swinging exterior. It's not too far off from what Rancid were doing on Let's Go! (not the most surprising comparison, since Lars Frederiksen guested on Bishops Green's first album).

The band themselves are a well oiled machine, with members having bounced around in several bands throughout Vancouver's music scene. This is a band strictly in their comfort zone, with undeniable command of their instruments and song structures. While they will toss in a scratchy guitar solo from time to time, the band also knows when to keep things minimal. "Defiance" offers a simple guitar riff backed by bouncy drums and yet it is easily one of the album's best tracks. "Stand up tall / Use your voice / Defiance, Defiance / Line them up / Push them back / Defiance, Defiance." Boilerplate Street Punk? Sure thing, but the aggressive lyrics match the blistering music so well that it is hard to argue against their inclusion.

Ninth track "Ship to Shore" sounds tired and a tad overwrought after eight tracks that mix the band's influences to much better effect. Bishops Green will inject some of the instrumental playfulness found on The Damned's best tracks, but when that vital ingredient is missing, it's all so deadly serious. That seriousness tends to wear down into a dull drone as the album comes to a close (There's a reason Shock Troop's initial running time was just under 30 minutes). The band manages to not completely fumble the finish, wisely ending with the tight, wiry energy of "Soldier." The track, much like the album as a whole, proves that there are still bands out there willing to shout their hearts out in the streets.

The Enders: The Ruins of Ambition