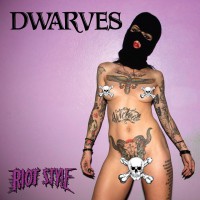 There is no denying that The Dwarves are an unpredictable band both in the studio and on stage. So leave it to them to record a live album in a radio station in Estonia of all places. This live recording would become what we know now as Radio Free Dwarves. However this release has been three years in the making because it was recorded in 2012, which was right in between the time the fantastic albums The Dwarves Are Born Again and The Dwarves Invented Rock & Roll were released.

The way Radio Free Dwarves is described is that it is a "12-song mini album" and that's accurate. All twelve tracks fit on to one side of the physical record and the B-side has an etching with no music on it. The tracks the band chose to perform though widely span the band's discography. The perform song on this mini-album like "Drug Store" from 1990's Blood, Guts and Pussy, "Act Like You Know" from 2000's Come Clean, and "Salt Lake City" from 2004's The Dwarves Must Die . So you can see that the musical time span here is pretty long.

And of course they had to throw in a (at the time) new song from The Dwarves Are Born Again. One of the songs they chose from that album is "Looking Out For Number One." But the band put a bit of a twist on the vocals. I don't want to ruin the surprise for those of you who haven't listened to it yet, but I will say that they added a few extra lines towards the end and they are a really nice addition to it.

It is also important to note that the Dwarves even rearranged a cover song for this performance. They took the drum-driven pop song "That's Not My Name" by The Ting Tings and warped it into a Dwarves song, which they call "That's Not My (FEFU)" on this album's track list. The best way describe is that they took The Ting Ting's original and mashed it together with the heavier parts of their song "FEFU" from The Dwarves Must Die and it absolutely kills.

The last two tracks on this record are also interesting. They are two acoustic tracks of "I Will Deny" and "FEFU" recorded by fans that won a Dwarves cover contest, which were produced by none other than Dwarves' front man Blag Dahlia.

Radio Free Dwarves is a "must-have" for any serious Dwarves fan. The audio from their performance sounds great. It's not muffled at any point in time nor are there any other technical difficulties through out it. All of the vocals and instruments sound even and very clear. It is a lot of fun to blast it on the ol' record player and it's a great look into how they sound live especially if you haven't seen them before. Shame on you if you haven't yet! They put on an amazing show.

I do want to end this on a more philosophical note though. Are the Dwarves the band that is going to save us from devolving into this overly politically correct and humorless society where every tiny step out of line causes mass outrage? Let's hope so. They can definitely get the job done.

Note to my fellow vinyl nerds:
The "banned" version of this album was pressed on 250 copies of half translucent fluorescent pink and half translucent fluorescent yellow vinyl with an etched B-side. It also came with a much more "revealing" alternative cover. This version also comes with a skin-magazine-style paper bag, silk-screened with the Dwarves' skull logo on it. The "tamer" version was pressed on 500 copies of coke-bottle clear vinyl with an etched B-side.

The Enders: The Ruins of Ambition