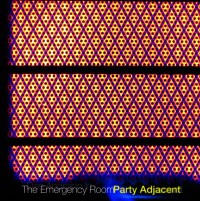 Dan Andriano In the Emergency Room

There was no Alkaline Trio album this year. However, 2015 has seen not one, not two, but all three members releasing solo albums. The strongest of the three -- Dan Andriano In the Emergency Roomâ€™s Party Adjacent -- is the latest to arrive.

Dan Andrianoâ€™s sophomore solo outing delivers more of his heartfelt sorrow. Since the release of â€œLost,â€ itâ€™s been clear that Party Adjacent would be something a bit different. There are plenty of Trio comparisons to be made, but thatâ€™s really a disservice to the album. â€œFire Pitâ€ is aurally the most similar to recent Trio work, but still stands on its own. All those B-sides from This Addiction and My Shame is True were incredible but didnâ€™t necessarily fit those albumsâ€™ themes. Here, Andriano doesnâ€™t have to worry about sharing the spotlight. Here, he can speak freely.

Party Adjacent opens with a lullaby -- sort of. â€œPretty Teethâ€â€™s soft melody lets Andrianoâ€™s low register lead the listener through a simple melody only to have the full band enter halfway and change things up. This is not the punk goes troubadour schtick youâ€™ve heard a thousand times before.

Andriano doesnâ€™t seem particularly happy. Nor did he on Hurricane Season. Lyrically, he spends a lot of time beating himself up. Either for his â€œnotes [being] sloppy and obsoleteâ€ or how heâ€™s been trying his â€œwhole life to find where [he] fits in.â€ His words are stark and powerful, but most importantly, truthful. No one does brutal honestly quite like Dan Andriano and here heâ€™s turned it up to eleven. The lone guitar on â€œDonâ€™t Have a Thingâ€ tears at the heart chords with its, â€œIf youâ€™re gonna say something, go on say everything, donâ€™t just say anything. If youâ€™re gonna love someone, do it honestly and completely.â€ Lines like these are his bread and butter, and, as always, failed relationships play a large role in his stories. â€œI donâ€™t want to be the reason that youâ€™re not happy. Iâ€™m just happy to be here breathing the same air you doâ€ shows his ability to mix joy with sadness, offering the slightest sign of hope.

Danâ€™s putting himself out there which is great for old and new fans alike. This is an incredibly solid release for a side project, and, while it may not have the pop flare of his day job, Party Adjacent's dark intimacy continues to pay off with each listen.