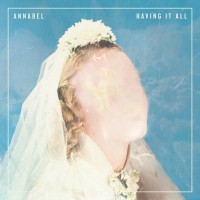 Every now and then, a record comes and sweeps you off your feet. Leaves you breathless and wanting more. We could all do with more days like these, right? Jump to Ohio's Annabel and a record I've waited on for years, anticipating the day when they'd show up and announce something that's more than just promise. Having It All ends up being both of these things -- a band stepping out into the light with a megaphone and producing an album that'll surely set the emo genre on fire. To call it exhilarating would be a stark understatement because these 11 tracks are something more than Midwestern indie with meaning -- they're the hands that just grabbed the torch for emo-tinged rock and shot out miles ahead. The victims of this smash-and-grab job better move quickly and alert the rest of the field that they'll have quite the task ahead in catching up! Good luck!

Having It All paints vivid imagery of the world we knew then, now and what we hope it could someday be. What's great about it is that it doesn't feel like your ordinary emo album despite the striking quiet/loud dynamic at play. Amid the explosive parts of the record, the musical proficiency and technical showmanship of Annabel really do well to show how they've evolved, not just from their older selves, but in terms of contemporaries and peers. A lot of this album is made for fans of The Sidekicks (also from Ohio) and Runaway Brother (in terms of musical structure) as another effortless product for indie-darlings and lovers alike; but that doesn't diminish the meaningful impact it parallels when compared to bands like Prawn and The World Is A Beautiful Place. Look at the opening three tracks for example. "Another Day, Another Vitamin," "The Fortunate Ones" and "If Only" all sound so different yet hit home and hit home hard with ease. They flow seamlessly into each other with bits and pieces of producer Evan Weiss' influence felt here and there. They pull from a handful of '90s influences, with the shouty indie rock of early Pavement and Sunny Day Real Estate tied into catchy yet intricate riffage. They form an emo aesthetic that feels unconventional but more so, like the organic direction forward that the genre should be taking. They may be late bloomers but the payoff's quite in-your-face by now.

The huge sprawls and powerful crescendos make the album that much more effective and to be honest, most of the tracks here feel like you've been locked in a dark room for days and you're only now stepping out into the sun and breathing fresh air. It's emotional to say the least and a lot of this can be chalked up to the flexible vocals of Ben Hendricks. He's so versatile and it's his alternating styles of delivery that makes him so appealing in terms of storytelling. It's definitely a cyclone of emotions stirring as he makes inroads to help distinguish them from their peers. They excel in blending the line between indie, pop, and punk as they marry high-energy basement rock with deliriously frantic indie-punk. "Ex-Introvert" is another stellar track off the album that brings up the things in life you want to outlast and simultaneously dredges up the memories you thought you outlived. It feels familiar but still gives a sense that Annabel's sound henceforth is going to be tough to replicate, which I've never felt before from their music. Even in the gang-vocals, everything feels crisper and more importantly, fresher.

With hooky riffs caked in distortion, Having It All is a collective that makes even the staunchest skeptic keenly believe in the band's earnesty and mysticism. The songs aren't too long nor are they too short and feel concise enough to get Annabel's points across. They get in and out your ear quickly, hovering around the three-and-a-half minute mark and perfectly scripting short bursts of wild, frantic energy. As "Nothing Good Gets Away" brings the curtains down, it's another flare of a gem signalling how unexpectedly awesome this record is. In this climax, it hits home that this album's not just one of the best emo albums I've heard but it's one of the best rock pieces period. Each song digs its teeth into you with a different sharpness and a different intensity and it feels so fucking good. Having It All will be looked upon in years to come as an era-album, the same way we look back at American Football and Mineral, to name a few. Quite a bold statement but I stand by it. As the guitars wrap around each other, you feel a sense of freedom. As each stick smacks the kit, you feel thunder as the earth shakes. As Hendricks yelps, you feel a yearning. One to step outside and look around, trying for a singular grasp on the concept of space and time, while looking back on fleeting moments. It locks you in a trance as time passes. Waiting, patiently. As the time runs out and the record ends, there's a warm rasp over your surroundings. One that provides comfort while recognizing how this kind of introspection can indeed be exhausting. But you know what? In the end, it'll be worth it. Totally. After all, Having It All doesn't just sweep you off your feet. It absolutely fucking levels you.