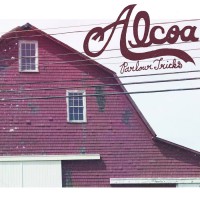 I've never kept it secret how big a fan I am of Derek Archambault. Whether it's his rip-roaring performances with Defeater or toning it down with Alcoa, I'm in. After Bone and Marrow, the latter's debut in 2012, I was glad to get a more personal insight into the deeper, vulnerable and open novels he kept. As fate would have it, marriage and a hip surgery last year would offer a duality that Archambault harnessed and smartly uses to craft yet another musical piece of stripped-down beauty.

It's definitely an album made for '90s alternative fans as well as those who love twangy guitars, bits of country and reflecting on life as the sun sets. The first two tracks "old habits" and "all dolled up" feel like a direct continuation from the debut and is a good direction to go in, as it sets you straight on Alcoa's musical path. They also flow neatly off the Thank You record put out last year for Archambault's surgery and add yet another endearing element to the band's presence. Skip to the heartbreaking acoustic in "it won't get better" and you've got the sad and polar opposite to my talismanic track from Archambault in "I Don't Mind". The former feels depressed and well, defeated. I love how it's a stark contrast to the optimism I thought would be overplayed on the record.

Again, it's deeply personal and hugely connective. Same can be said for the emotional "poison acquaintance" - which sinks into you heavily with its soothing piano melodies. A collection of tracks from a diary kept during hard times, undoubtedly. Ultimately, the record doesn't revolutionise anything and you do need to be in a mood to take it in - open, candid and honest with life and your place in the world. Does it drag a bit? Maybe. It won't be for everybody. But what's great to hear is that the music Alcoa continue to make comes from a much older and wiser place. Feels settled throughout many trials and tribulations. Now, the trick is to see how well that bodes for Defeater. Eager.