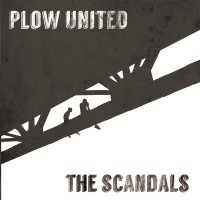 When Plow United came back with Marching Band in 2013, the band gave themselves space to slow things down at times, exploring the potential of a more steady tempo paired with a concerned melody. Those who have heard that album know how well that worked out for them. "Coda," the first song on this split, finds the band indulging in their old ways, cramming as many ideas as they can into a sub-2 minute song. Plow United as a whole couldn't sound more comfortable here, with each band member following the song's push and pull speed.

The Scandals don't start off on such level footing. The opening of "Second Thought" finds vocalist Jared Hart squeezing words out like gravel emerging from the back of his throat, putting too much emphasis on the gruffness of his voice. Here the vocals are mixed far above the instruments, almost as if they exist in a vacuum where everything else is drowned out. Once the guitars begin to swing and the song picks up momentum, the vocals sound a lot more at home. "Second Thought" has an unwarranted running time, lasting nearly five minutes. Following Plow United's kurt, energetic 'Coda," it couldn't be more obvious that the track is in need of some trimming. Hopefully this isn't anyone's introduction to the band, as the song finds The Scandals limping out of the gate.

"I'm Onto You" finds Plow United leaning on that aforementioned slower side (albeit, only comparatively slower). The song's chorus is one of the most straightforwardly catchy things Plow United has been responsible for, sounding like something that wouldn't be out of place playing on a late 80s college rock radio station.

The Scandals' "Sirens" (a re-recording of a song originally found on The Sound of Your Stereo) has a more laid back feeling, despite the allusions to rioting in the lyrics. The words here are reminiscent of Nebraska era Springsteen, and not just because of the Philadelphia references. "Sirens" also finds the band sounding more self assured, with its chugging riff and surly melody.

Plow United are a much more economical band compared to the stretched out sentimentality peddled by The Scandals. They're two bands simply trying to achieve two completely different things, that much is abundantly clear. Yet, it wound't be difficult to imagine these two sharing fans.

Horrible Things: Everybody Else