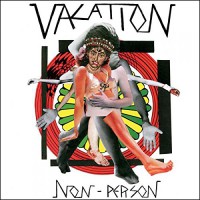 I first became exposed to Vacation through their song onÂ The Thing That Ate Larry Livermore, the Adeline RecordsÂ compilation that came out a few years back. Among the candy-coated pop-punk melodies that populate that album, you'd think their song "No Mercy" would stick out like the fuzzed up, raw garage thumb that it is. This was not the case, as Vacation showed their ability to throw a quality pop melody into a scuzzy vat of noise without completely burying it. It still stuck out on that compilation, but it wasn't so much a sore thumb as an inflamed forefinger. And that brings me to their latest album, Non-Person, where Vacation are able to deliver a fistful of inflamed fingers with a dignified assurance.

Vacation don't exactly show their hand, letting the listener peel apart their songs like sticky taffy stuck to the wrapper. The more you peel back, the more intricacies you find within. "Like Snow" may seem like a simple tune with a catchy melody, but with repeated listens the acoustic guitar strums bubble up from the surface and added melodies emerge. This isn't so much sneaky as unassuming, rewarding the listener for playing closer attention. Other tracks like "Real Gore" and "Butcher's Grin" are over before you can even comprehend them, splitting your head with a concise blow and transitioning to the next song.

Vacation has gone through some lineup changes recently, making Non-Person their first album as a four piece. The band revels in the opportunities an extra member allows them. Songs like "Every Direction" take advantage of a second guitar player and throw flourishes in with feedback squeals. "Wish I Could Be Someone Else" sounds like the missing link between the hyperactive Coachwhips and the ecstatic psychedelia of Thee Oh Sees. Standout track "What I Found" opens with what I can only call a hornet's nest influenced guitar line blazing over a warm synthesizer before melting into a steady acoustic guitar strum. Songs like this give me the idea that Vacation is a band that knows exactly what to do with their influences without devolving into the practice of photocopying other bands.

The vocals on the album lean towards displaced deadpan and forceful intensity, oscillating between the two like a loose door hinge in the wind. Other songs sneak in a warbling melody like those found on Karen Dalton records. There is front to back aggression to be found here however, with opener "Heat" sounding like a garage-punk Frankenstein barely held together with wet duct tape.

Frankenstein's monster may actually be an apt descriptor for this record. The band obviously pulls influence from many genres, with punk, glam rock and power pop getting exposure on the record. And given the album's cut and paste body part album cover and the various references to self-mutilation ("The Effort") and physical decomposition ("Decaying" and "Like Snow"), the album drips of references to bodily freakishness. Non-Person isn't the sound of body parts becoming unstitched, however. On the contrary, it's reminiscent of an inhabitant finding out just how powerful it's new body is.