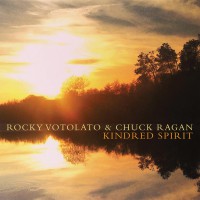 Kindred Spirit is a very fitting title for the EP at hand, given the draw of singers/songwriters Rocky Votolato and Chuck Ragan. Both are heart-on-sleeve solo acts that make music for the fading twilight. In terms of vulnerable slow-burners, both guys continue to show why you can't go wrong with their musical brand which constructs windows for you to escape the confines of the world. On the heels of the another well-crafted album in Hospital Handshakes, Votolato sets the stage here and acts as the tension builder on his three tracks -- all soft, acoustic jams. It's a great dynamic for him to go first as it allows Ragan's trio of songs to come off as the release component, playing off the resolution and drama painted by Votolato earlier on. In short, they complement each other very well.

The music's simple, endearing and heart-jerking. In other words, there's no real change to their modus operandi. Votolato's more acoustic/indie and less folky which I think works better for his onward progression, evidenced by his last album. His music continues in its airy nature, making open and personal statements for fans to revel in. "Sparks of Recovery" and "Let Go" continue his narrative off Hospital Handshakes and feel very much like B-sides to it. As he stretches on each syllable, Votolato's honesty feels wiry, spirited and crisp, sticking with what he's established on the majority of his earlier stuff but which still feels fresh and rewarding at present. The music feels made for subdued mumbling and for Votolato to swallow his own words as it trods and trods but it's really neat how he still stands head above water, settling into each musical note. More so, he doesn't let the music bog him down and wallow in depressiveness. By now, it's clear that he's emerged as one of the most mature, piercing acts out there alongside guys like Frank Turner, and well, another kindred spirit in Ragan.

Ragan's acoustic punk, if there's such a thing. As expected, his hoarse voice is more pronounced, aggressive and commands a bigger presence on the EP. He's much more country/folk-oriented with his cavernous voice echoing at every corner, extolling downtrodden lines but it's all done with a high-strung intensity. Ragan delivers the standout on the split with "Before Dust," which is met with agile solos and precise percussion. It ends a bit frantically but all preceding tracks feel like they were gearing to this with a forward, stumbling momentum - reflected in the lyrics, which talk of things deflected and things put off. The rasping solos commandeer a lot of attention and fills the gap for those craving more material. Both acts definitely feel like they're occupying the room they left to grow from days past and are soundly answering critics. When both dropped off the boil, I found a lot of criticism unwarranted and a bit harsh, especially in Votolato's instance, but I love how each act blends into the next, correcting mistakes of old. One's in the background, quiet and to-himself; while the other's more at the forefront, lunging amid tangled, pinging guitars.

The fact that they aren't so far-flung from each other makes this split stick. Each aligns with the other's essence so well. Ragan comes off typically unstable and jittery - the ideal foil to Votolato, who's more composed and finessed at the other intervals. If you're a fan of either, then this taste is sure to guide you into the accompanying act. These six tracks capture you through shimmering lyrics, which heavily invoke your most gut-wrenching memories. Dig in and enjoy the feels because the musical aesthetic here's nothing short of emotional. And uplifting.

The Vigilance Committee: Exit A Hero