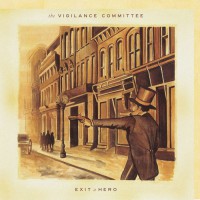 Opening track â€œSet The Pacific On Fireâ€ tells the story of 19th century gold rush journalist James King of William and showcases the bandâ€™s talent for both swagger and songwriting. If you listen carefully enough there are even shades of Reinhold Messner-era Ben Folds Five in the layered vocals and minor-tinged, hypnotic melodies. Other highlights on the album include the alternately soaring and choppy â€œ186,â€ the contemplative â€œExpositorâ€ with its ringing guitars and mournful lyrical lament â€œtruth dies," and finally eponymous album closer â€œExit A Heroâ€ with its patient introduction, circular riffs and vaulting harmonies. At times, with their constantly shifting grooves, baffling time signatures and sharp, intricate musicianship, the band even venture into Weather Report territory.

So, while their name may make them sound like a government organisation, The Vigilance Committee are anything but mundane. This is ten tracksâ€™ worth of creative, grunge-inspired alt-rock that warrants multiple listens.

The Kneads: Letting You Let Me Down