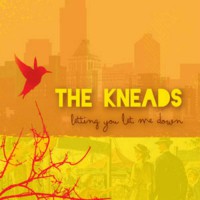 The Kneads are an extremely interesting band. Their refreshing melodic pop rock bleeds into their post punk and alt-rock influences like Fugazi, Weezer, Dinosaur Jr. and The Dismemberment Plan. If you couldnâ€™t tell already, the band has a killer sound. The bandâ€™s debut album, Letting You Let Me Down, is almost an hour-long mix of freshly written songs with a variety in punk rock from front to back.

Many of the songs vary in sound, but the band does a great job of keeping consistency within the bandâ€™s style. â€œForgotten Colorsâ€ is a slower song that has a melody reminiscent of Foo Fighters while â€œNorth and South of Temperamentâ€ opens the album with an energetic blast like The Dismemberment Plan and more contemporary emo bands. Both songs accentuate the bands vast style that synchronically forms the bands sound.

Keeping up with the albums vast influences of sound, â€œPersistence Changes Everythingâ€ is the closest thing we might get to a Fugazi reunion, where the vocals are Guy Picciottoâ€™s voice box in another manâ€™s throat. The song is energetic gold and blends into the flow of the record. The band is able to carefully place the songs in the right order to allow the variety in sound to function properly. â€œThe Wit of the Staircaseâ€ is an incredibly energetic and rambunctious instrumental with plenty of guitar tones and melodies for five minutes and 50 seconds.

It seems like The Kneads have released a fine album with tracks that are heavily influenced by a wide array of bands. The bandâ€™s sound is vast and it seems as though theyâ€™re trying to find a definitive distinction. The songs are great if youâ€™re into a wide array of punk and pop rock and it certainly great whether youâ€™re down or if youâ€™re just driving. While the album runs a little past its running time, it does use it wisely. The band may not have found their own sound just yet, but they overall released a solid debut album.

The Vigilance Committee: Exit A Hero