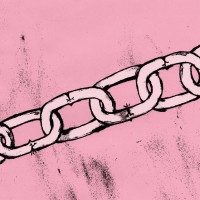 Socialite are a young hardcore band from Philadelphia without many releases under their belt. They're a wide-eyed group of upstarts taking glee in what they can accomplish, no matter how simple. Their guitars screech and squeal with fuzzy abandon and it's obvious the band is smitten with this. Feedback notes squeeze out of these songs, painting standard, by the numbers hardcore tunes with high pitched howls. Though it's obvious the band is enjoying themselves, the recorded results are mixed.

The band aims for a typical aggressive post-hardcore whirlwind, similar to what Greys were able to do so well on their album last year. On "Chained to the Grave" Socialite employs a feedback shriek to accentuate a point in the lyrics. It's a novel little trick that loses appeal once they repeat it on "Socialite" "Miscommunication" opens with a cycling drum beat before employing a mid tempo chug. The track has a good build with sturdy guitars, but it ultimately plateaus until it sputters to a finish, leaving the impression that these songs were recorded half-baked. "Street Freak" is the most effective song here, though it is deceptively simple. That may be because I'm a sucker for a tumbling bass line plowing through a simple foundation.

If rollicking post-hardcore is your thing, then you can do much worse than the 8 minutes on I See You/I Don't Care. It's nothing revolutionary, but I get the sense that Socialite weren't aiming for revolution anyway.

The Kneads: Letting You Let Me Down