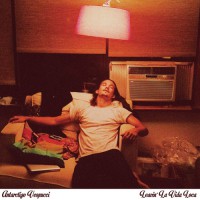 Chris Farren and Jeff Rosenstock want to be better. They want to achieve goals they set for themselves. They want happiness, a future and all that jazz. But, damn it, life keeps getting in the way.

Antarctigo Vespucci's Leavin' La Vida Loca picks up where last yearâ€™s Soulmate Stuff and Iâ€™m So Tethered left off. Itâ€™s more of Chris Farrenâ€™s bleak yet hopeful lyricism backed by excellent playing and production work from Jeff Rosenstock. Sometimes it sounds like surf rock, sometimes like 90s power pop, sometimes like Farrenâ€™s Fake Problems. But this is a fuller, more realized record, and their sound has absolutely benefited from the addition of Benny Horowitz (of Gaslight Anthem) grounding the songs with his notable drum contributions. It maintains an upbeat tempo, but this is not a happy album.

The constant struggle between the person Chris Farren is and the person Chris Farren wants to be acts as the main conflict throughout. His failures and triumphs are specifically his own but can easily be interpreted as everyone elseâ€™s. The ridiculous and amazing title, Leavinâ€™ La Vida Loca, accurately depicts the thoughts and insecurities that weave in and out. Farren searches for greener pastures he no longer can be sure exist. As is often the case, idealistic future endeavors are crushed by current reality. On â€œHooray For Me,â€ Farren follows the idea of â€œI wanna live better than everyone, I wanna take over the world in my lifetimeâ€ with â€œIf I die, that would be just fine.â€ Common themes include a need to be taken care of, living in hell, and bad memories. The album closes with Antarctigo Vespucciâ€™s most anthemic song to date, yet itâ€™s titled â€œI See Failure.â€ And â€œWhen I look into the future, I see failure and fear and death and endless tragedyâ€ doesnâ€™t exactly suggest a man content. The 10-song, 26-minute collection ends with a question, â€œDid I stay too long?â€

No, Chris, you didnâ€™t. You left us wanting more.

Leavinâ€™ La Vida Loca is a record made in Brooklyn, NY by two friends that call themselves Antarctigo Vespucci for roughly $300. It is not only a contender for best album of the year, but a soon-to-be genre classic. Farren and Rosenstock have done sometimes truly inspiring here and people will take note. Hopefully, at least for some amount of time, Antarctigo Vespucci can enjoy their incredible achievement.