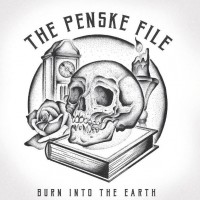 Burlington's The Penske File have a knack for churning out upbeat, melodic pop-punk but as the harmonica-led anthems indicate on Burn Into The Earth, they do so with a fresh twist. One that isn't too folky but one that delivers a certain charm which would be easily recognizable for fans who watched the band strengthen their sound over the past couple years. Grave Escapes was one of 2012's hidden gems, which yielded an even better follow-up just over a year later in A Restless Symphony but in terms of their most complete musical novel to date, this record accomplishes just that and much more.

Tracks like "Damned" and "Put Your Dreams To Bed" are the poppy, punk-leaning tracks you expected from them. It's also very much aligned with Steve Rizun's production resume, having worked with bands like The Flatliners, Motorleague and Junior Battles. Again, the harmonicas add a fun element to that album and while stylistically different, there's something here that feels very familiar to countrymen, PUP. It may be the earnest songwriting or the warm, bubbly hooks but it's still something I can't finger just yet.

"Dead Letters" expands their sound a bit also -- feeling much more shouty, filled with screams and just a tad more passion than the other easygoing, laid-back tracks. A lot of this record is jammed with infectious choruses, fun melodies and more importantly, minimal filler. The Penske File, yet again, manage to easily put out a record that captures the ferocious spirit of the band but the biggest takeaway on Burn Into The Earth is that it feels much more personal as opposed to the older records - which felt tagged more to places and experiences. "Young Hearts" and "Home" are two of the most perfect endings that pretty much encapsulate their message this time around. It rounds things off and feels like getting off a bus and opening your door for the first time, seeing and touching the things you've missed for months. This time around, The Penske File emerge as an even more open book and that's why I rate this the best of the bunch.