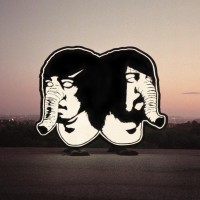 Death From Above 1979 as a band boasts some great qualities -- their wall of sound stems from a two-piece; they broke up and reunited and brought us The Physical World; and, perhaps best of all, they come out of the sprawling metropolis of Toronto. The Physical World, in comparison to their previous releases, is a little less noise-rock, a little more radio friendly, and it's definitely dance-punk. Something, perhaps, somewhat reminiscent of Queens of the Stone Age: a post-punk sound full of catchy hooks and sexuality, still brimming with that grittiness and angst. And volume. Donâ€™t forget the volume.

Calling The Physical World one of the best albums of 2014 wouldnâ€™t be an exaggeration in the slightest. Itâ€™s the kind of album you can listen to on repeat (and, of course, at top volume, but that should go without saying) without getting sick of it -- thereâ€™s just so much wrapped up in those 11 songs, from pop culture references to thick layers of guitar and the kind of riffs thatâ€™ll be stuck in your head for weeks.

They certainly donâ€™t waste time with this album. Leading off is â€œCheap Talk.â€ The song leads off with noise and percussion before bringing out the heavy guitar, a taste of whatâ€™s to come on the rest of the album. Itâ€™s fast paced and loud, and, as the title implies, riddled with sexual themes. But anything less just wouldnâ€™t have fit. â€œRight On, Frankenstein!â€ is certainly a highlight of the album, a song a little on the darker side, following suit with a quick tempo and a highly infectious chorus followed by a few very Queen-like seconds of vocals. The third track, â€œVirgins," has a somewhat slower tempo than the preceding songs, and is rather radio-friendly. That, of course, doesnâ€™t make it any less catchy. â€œAlways Onâ€ comments on societyâ€™s constant communication and need for social media with repetitive and memorable guitar progression, providing that lyrical homage to Kurt Cobain thatâ€™s a near necessity.

â€œCrystal Ballâ€ boasts strong vocals and more haunting hooks and choruses while â€œWhite is Redâ€ slows things down once again with a song about youth, pregnancy and heartbreak. Things pick up once again with â€œTrainwreck 1979,â€ the single off the album, a song with a heavy dance beat and a chorus that sounds like it could be straight out of a commercial, which is no weakness. The ending beat of the song moves straight into â€œNothing Left,â€ with more heavy guitars and simple lyrics â€“ summed up best, perhaps, with the lines â€œno money, no love, no tendernessâ€. Once again, the song segues straight into â€œGovernment Trash,â€ angry and quick with lines that canâ€™t help but remind one of a certain, rather infamous, mayor of Toronto. The guitar riffs climb quickly, and the song ends in noise.

â€œGeminiâ€ leads off the same way â€œGovernment Trashâ€ ends, which leads to the final track on the album, the recordâ€™s namesake, â€œThe Physical World.â€ The longest song on the album, itâ€™s certainly a track to pay attention to. Itâ€™s heavy, itâ€™s dark, itâ€™s noisy. The chorus and verse vocals are juxtaposed with one another, but the heaviness and aggression within the song is constant. It breaks off for a guitar solo, which fades into an antique-sounding piano, which breaks off suddenly. Itâ€™s the kind of end to an album that you remember.

Itâ€™s been a long time (ten years) since Death From Above 1979 have released a full length album, and, understandably, their sound has changed some. Theyâ€™ve certainly grown as artists, and The Physical World proves it. Itâ€™s one of the must-listens of 2014 -- hell, itâ€™s one of the must-listens of the 2000s in general. The album doesnâ€™t have a weak spot, doesnâ€™t have a song to skip during a play through, and I, for one, havenâ€™t tired of listening to it yet. Itâ€™s a damn strong album, through and through.