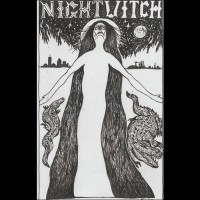 Roaring into existence from Tallahassee, Florida, Night Witch rage with two goals in mind: to scream their lungs out, and smash the patriarchy in the process. Too often, punk rock can feel like a bit of a boys club at the expense of hearing from different perspectives, and every once in a while the tepid punk rock cauldron needs some stirring. Alongside such bands as G.L.O.S.S. and War on Women, Night Witch join the recent movement of bands emphatically giving voice to topics and people too often pushed to the wayside in punk. On their self-titled debut release, Night Witch bring the fury within eleven songs clocking in at just around ten minutes, and in turn deliver one of the more intense hardcore releases youâ€™ll hear this year.

Lead singer Rosie is mad as hell and not gonna take it anymore, and in a vocal performance reminiscent of fellow hardcore band Punch, she airs her fury before a barrage of crunchy, speedy hardcore exploding in minute-long bursts. The aggression is palpable, relentless, and dirty, and Rosieâ€™s voice is so shredded with anger that it might give listeners secondhand sore throats. Listening to these eleven tracks, it is easy to imagine this band in a stuffy basement somewhere, a pit full of sweaty people shoving about before them in the chaos. Night Witch begs to be seen live, and the recording does an excellent job of capturing this essence, which is always an important aspect of hardcore of this style.

â€œNormativeâ€ starts the proceedings off on a properly furious note. â€œI am angry without a second thought!â€ sings Rosie, which at this point is already a fairly obvious and awesome statement. â€œBruh (Nice Guy)â€ is about sexual assault and the tendency for the masses to side against the victim rather than alongside, and is one of the more memorable, stinging tracks in the collection. On â€œWhy Am I Here?â€ Rosie questions her role in the hardcore scene, singing â€œWhy do I subject myself to watch this macho shit, watching boys prove their masculinity while pushing women aside when almost every other band is another white boy crying about a slut breaking his heart. Why am I here? Why do I want this?â€ This song serves as not only a tentpole for Night Witchâ€™s album, but addresses the elephant in the room: that hardcore is far too dominated by men and manliness, and in turn alienates many with its attitude. But despite this question of exclusivity, Night Witch hold their own and bring a different point-of-view to the table, and I for one am glad that Rosie has stuck around.

Night Witch is vicious and unapologetic. Their lyrics tackle heavy topics that need discussing within the context of punk and hardcore, and are a breath of fresh air in a scene rank with years of testosterone.