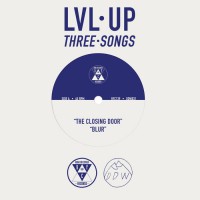 There are only a certain number of people who can make a convincing and entertaining show of total disinterest. One of those people is J. Mascis, the silver haired guitar riff wrangler whose monotone vocals drift over Dinosaur Jr.'s soaring tracks. Mascis is not the most emotive person, but his singing sounds more vulnerable than distanced. At its most bare, his voice sound like a demure child trying to calm himself down. To counteract that, you have the vocals on "The Closing Door," the first track on Three Songs by LVL UP. The singer sounds bored out of his skull and 75% asleep. The only thing that makes him sound livelier by comparison are the vocals on the closing track of Three Songs, "Proven Water Rights." Stephen Malkmus got away with his detached posture because he was infusing it with creative and thought out songwriting. With the music on this new EP, it's hard to blame the LVL UP singers for sounding so uninterested.

This EP has the instrumentation of a band who wants to write a slow song, but have no idea what to do with the format. It sounds like acolytes of Weezer's first album heard Secret Name by Low and thought, "Oh, easy. We can do that." Turns out it's not as easy as they thought. Stuck in the middle of the track list, "Blur" finds the band in their comfort zone. It's not exactly a compelling song, but the band seems more confident in what they are doing. On repeated listens, you can parse out the positives here (a catchy vocal tic here, an audaciously fuzzy bass line there), but you can only filter out so much.

LVL UP may have felt they were in a box with their songwriting. It's only natural that they should try to push themselves out of their comfort zone. The band is obviously trying to stretch themselves here, but if you stretch too far too quickly, you can hurt yourself.