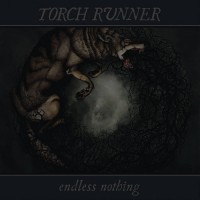 Have you ever heard a band so punishing that you feel it down to your bone marrow, leaving you aching and tired, yet craving more? Thousands of punk and metal bands have tried to capture this lightning in a bottle on their recordings, with very few succeeding. For the last seven years, Greensboro NCâ€™s Torch Runner has been pulverizing listeners on their seemingly neverending tours, with the defiant vigor of Black Flag and the sonic boom of Napalm Deathâ€™s early material.

But despite such excellence on the â€œstageâ€ (I use the word stage hesitantly as more often than not they are playing house shows or DIY venues, avoiding the traditional rock club circuit), the band has never been able to completely capture their vitriolic wall of sound on wax. Their early releases such as the Locust Swarm ten inch and their split with NC black metal titans Young and in the Way showed they had already honed their songwriting into a sledgehammer of brutality, but something always seemed lost in terms of production and capturing that mysterious magic that makes a good record great. They inched closer on 2012â€™s Committed to the Ground, with a flashier production quality and a songwriting style that inched closer to grindcore than their early crust/hardcore oriented releases. But even still, the record pailed in comparison to their live show, which would leave venues crumbled and bones bruised.

On their latest release,Endless Nothing, Torch Runner have done the seemingly impossible of capturing that indescribable â€œitâ€ factor that they have had for years but never been able to completely exhibit on recordings. Opening with the doomy waning chords in the intro of â€œAttritionâ€, leaving the listener a false sense of security before singer Rob Turner begins belching out his traditionally blasphemous words that are outright startling, the song quickly turns into a torrent of blast beats and black metal tremolo chords that have the subtlety of a train wreck (in a good way). Torch Runner then takes you on a journey that is as mentally exhausting as it is rewarding. Refusing to be put into a box, the band synthesizes the grunting power of hardcore, the unrelenting speed of grind, the socially conscious anarchism of crust, the plodding rhythms of doom/sludge and the riffing and brutality of blackened death metal into a concoction of some of the heaviest music imaginable.

Perhaps one of the things that make this record so special is that it is such a condensed group of songs that, much like an album such as Reign in Blood, deserves to be listened to in itâ€™s entirety, and it has such a short running time that it does not have to feel like a chore to get through. Torch Runner gives you exactly what you need, and then sends you packing. The music is so incredibly punishing that it is only natural to want to punch your hand through the wall in the sheer adrenaline that the songs provoke. With this being their first album on the titanic metal label Southern Lord, the band is in the position of being able to play to a larger audience, a reward that they hugely deserve over other bands (which I shall leave unnamed) that build hype after being a band for a year or two, letting their heads blow up while they continue to pedal a mediocre product. If you like any sort of heavy or aggressive music, than you deserve to treat yourself to what can only be described as a modern monolith of rage.