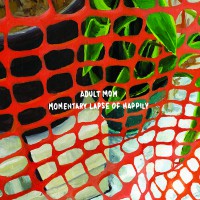 Stephanie Knipe's music has always been about survival, coming off novel in terms of ideas and strung along lines that can be perceived as depressive. However, listeners shouldn't misconstrue the words, because in peering deeper, Knipe's music, as seen on Momentary Lapse of Happily, is about overcoming emotional turmoil, eroding away life's guilt and persevering in the face of unnecessary drama and bigotry. Under the guise of Adult Mom, Knipe manages to touch on many conflicts in life yet again -- sexuality, gender and so many more traumas -- and through these experiences, Knipe brings forth one of the most personal indie/emo gems this year.

The tracks are spread across a vast array of sounds and influences. There's a great mixture of lo-fi indie, jangly garage rock and alternative-folk stuck in. The openers, "Be Your Own 3am" and "Survival" best sum up stylistically what the record's about. Throughout Momentary Lapse of Happily, you'll draw parallels to Alanis Morissette, Sufjan Stevens and even Frank Turner in the way the album's arranged and flows. These tracks in particular are catchy, melodic pop-rock efforts that sound like quite a few other acts out there but somehow, are crafted to stand on the precipice with their own characteristics shining. They don't fall in line with other contemporaries as much as I once thought they would. The simple structures and minimal vibe work well with Knipe's vulnerability on the mic (a la Hop Along's Frances Quinlan). It adds extra layers to an honest disposition.

Quite a few songs also burst out the gate with upbeat indie percussion (reminiscent of Blur) and it's no shocker because of how much the artist has admitted being influenced by the '90s. "Meg Ryan" is an example of this as well as "When You Are Happy" which has tinges of Len to it. Then there's "Sorry I Was Sorry" which as cheesy as it is is still a powerful, slow-burning song of unrequited love. This reminds you that as influenced as Adult Mom is, it's not to the point where it's overly imitative. It's a heavy listen but well worth your time.

"Sun Theory" is an acoustic jam to further rein this in which shows an Elliott Smith POV as Knipe touches on human impulse, consequence and overall, recovery. Such is the emo aesthetic of the album which really doesn't stick to one narrative or follow any specific blueprint. At record's end, Adult Mom implies a lot -- and that's to let life win. It tugs at you, bringing with it a deep sense of optimism amid harsh doses of reality.