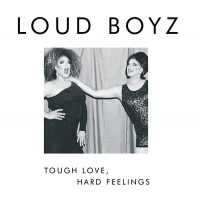 Loud Boyz have no remorse. If the title Tough Love, Hard Feelings doesnâ€™t convince you, listen to the 22 minutes of the record and youâ€™ll hear for yourself. Loud Boyz are fierce, heavy, charged and angry and while theyâ€™re not necessarily reinventing the wheel, theyâ€™ve taken a few tips from the creators and are certainly trying to innovate it. Tough Love, Hard Feelings is a grimy and fast punk record that draws queues from a variety of different bands to form their own key sound.

Loud Boyz energy is heavily expressed in the manner it should be: fast, loud and to the point. The band wastes no time creating memorable punk songs that are crafted carefully and donâ€™t bleed into one another. â€œ4 The Ladiesâ€ is a song that shows the bandâ€™s melodic side without ruining the heavier flow of the record. Itâ€™s a song that truly shows the bandâ€™s writing capabilities of any type of punk song. A lot of the record makes me think if the vocalist of Dead To Me were a little throatier and the band was faster, Loud Boyz would be the result.

The bandâ€™s chord structure has a melodic street punk feel to it. The band tampers around in the punk genre while continuing to maintain their sound throughout. â€œCasual Encountersâ€ has a complex chord structure yet manages to stay within the parameters of what one would consider a Loud Boyz song.

Loud Boyz certainly manages to keep their sound continuous. The songs have an ultimate variety in influence, while still managing to capture the bandâ€™s sound. Tough Love, Hard Feelings is a refreshing piece of punk rock that will engage any fan of The Buzzcocks to Kid Dynamite. The bandâ€™s ability to keep their sound refined and intact is impressive as it is not always easy to break away from sounding like most punk bands. â€œLoud Boyz Anthemâ€ closes the record with havoc wreaking punk rock and hardcore that may be the hardest hitting song on the record. Loud Boyz are able to craft better and better songs as the album steers towards completion.

While this is the bandâ€™s first release, it doesnâ€™t seem as though Loud Boyz are stopping anytime soon. Known for their live performances, the band now has a concrete album they can finally show off their energy they transfer sonically for fans to soak in. Tough Love, Hard Feelings is a sonic testimony to Loud Boyz energy as well as their commitment to making great hardcore punk. The bandâ€™s solid and original sound might soon earn the band a stapled position in the punk scene. These guys are amazing.

Against The Grain: Road Warriors