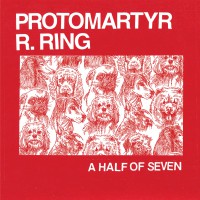 Detroit's Protomartyr have released two albums of desolate post punk in the past two years. The year they took between releases saw them grow from releasing fuzzy, angular songs to making the atmospheric tunes found on their excellent second album, Under Color of Official Right. "Blues Festival," their contribution to this split, finds them following that same path. No Protomartyr song would be complete without Joe Caseyâ€™s sardonic lyrics and this cutâ€™s got them in spades. Here Casey expounds wisdom on being an independent band in the always deforming music industry: â€œHell is singing straight into the void / Hell is forever being local support.â€ Casey drawls with a delivery stuck somewhere between The Fall's Mark E. Smith and Lou Reed. Add breathy backup vocals from Kelley Deal (R. Ring, The Breeders) and dynamic instrumentation, and youâ€™ve got a track that will worm its way into your brain.

R. Ring is a duo consisting of Kelley Deal and Mike Montgomery (Ampline). Fans of their other bands should not be disappointed in their song, "Loud Underneath." Sounding like an in-their-prime Throwing Muses track, this song could have easily found itself in regular rotation at your college radio station if it was released in 1995. R. Ring doesnâ€™t have much material floating around out there, but if this song is any indication, it wouldnâ€™t hurt to keep an eye on them.

Against The Grain: Road Warriors