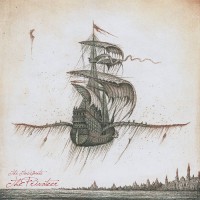 I've been singing the praises of The Tosspints to anyone will listen for quite a while now. That being said, I was a bit apprehensive when I heard that their new LP would be loosely nautically themed. This land-lover was concerned about the band's ability to come up with their typically gut-wrenching songs within such a narrow context. Before opening track "Pirates Life" was over, my mind was already at ease. The first thing I noticed was how loud and overdriven the guitar is. It's definitely hotter than usual for this normally open chord playing Celt-punk trio. No one's going to mistake it for the new Slayer album, but it's got a couple of riffs that would certainly qualify as metallic. The lead vocals are also aggressive and urgent sounding. The backing vocals are layered, interesting and well arranged. This has long been a Tosspints trademark.

"Untitled Western" might be the fastest classic country flavored song I've ever heard. "Marching On" takes the key musical elements from the traditional song "Johnny I Hardly Knew Ya" and makes them into something new and compelling. "We Are the Many" is a powerful song that could have been a battle cry for the Occupy movement, or the theme song for the 99 percenters. The fact that it's an ex-GI questioning his country's priorities gives it that much more impact. The Privateer is the Saginaw, MI band's fourth album and also finds them revisiting common topics. "My Last and Only Friend" could easily be a sequel to the band's 2011 song "Whiskey Be My Savior". The occasional drinking song is a must for The Tosspints.

Guitarist/vocalist and primary songwriter Don Zuzula has long suffered from Post Traumatic Stress Disorder from his time in the military. This obviously has a major impact on many of the songs, sometimes overtly and sometimes in more subtle ways. If The Privateer were to have a hit, it would almost certainly be "Hollow Man". It's somber, earnest, introspective and catchy as hell. On "How Do You Feel", Zuzula seems to be weighing the consequences of his PTSD on those that he loves. These are the types of soul-baring songs that make The Tosspints exceptional. "Sailors Grave" and "The Dregs" are solid tracks that work well within the album's overall theme.

The LP closes with the epic, nearly 16 minute long title track. Like most songs of this type, it's made up of three (or maybe more) different songs loosely tied together musically. The addition of violin on the mellower passages is a nice touch. The lyrics drive the story without the benefit of repeating choruses. It unfolds in movements that represent the different stages of a life. You can feel the music shift from innocence to innocence lost to acceptance of one's fate. It's an impressive piece of work with repeated musical motifs throughout. "The Privateer" is more difficult to appreciate than a standard four minute song, but should be applauded for its ambitiousness. The Tosspints have been around for quite a few years now, and they haven't grown complacent. They are not just phoning it in or going through the motions. They continue to push themselves with new musical challenges. The Privateer is another excellent album from a band at the top of their game.

Cradle of Filth: Hammer of the Witches