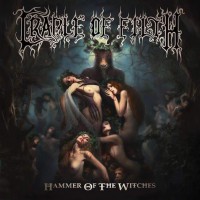 Cradle of Filth releasing a concept record is like Tim Burton casting Johnny Depp in his next movie. Of course that's what they're going to do, why bother acting surprised? It's what's expected of them. Hammer of the Witches is Cradle of Filth's 5th concept record and their 11th overall. Despite numerous lineup changes, the band stands firm in their execution. This album features more of the same, with Dani Filth drenching razorblade guitars and orchestral swells with his wispy screams. However, this album is their most vital and fun sounding record in nearly a decade.

Cradle of Filth is a band that has a confusing amount of popularity overseas, maintaining a near household name status despite (or maybe because of) their graphic imagery and overbearing theatricality. To get a good idea of what this band is about, listen to "Yours Immortally...", with it's blinding guitars, artificial string stabs, and ever so slightly bloated running time. Or you can simply take a gander at "Deflowering the Maidenhead, Displeasuring the Goddess," which is a track title that is so overblown and occult-lite that it really couldn't belong to any other band. But, that is part of the appeal of Cradle of Filth. They wear their dark arts theatricality on their sleeves as they blast you with brooding and moodyl extreme metal. They may be polarizing, but those who enjoy them can have fun when the band isn't too lost in their own mythology.

2012's The Manticore and Other Horrors featured a paired down version of the band, but Hammer of the Witches is a much more fleshed out affair, featuring two new guitarists, keyboards and female vocals (put to good use on Deflowering the Maidenhead...). Cradle of Filth are at their best when aiming for grandiose operatic camp because sometimes they actually reach the high they're looking for. "Blackest Magick in Practice" features melodramatic touches between punishing onslaughts of drum/guitar fury. The title track features well executed back and forth vocals and a tight, dynamic instrumental progression. "Right Wing of the Garden Triptych" stands out the most here, with floating female vocals, catchy guitar pummels, and upfront keyboard work. Where this all fits in with the album's concept concerning witch vengeance is up in the air. Following the lyrical and thematic threads is in no way empirical to your enjoyment of this record.

After nearly 25 years as a band, Cradle of Filth are a gothic metal institution. They've pulled together a dedicated fanbase that will follow them wherever they go. Yet Dani Filth's songwriting remains as concerned and steadfast as ever. Despite the band's new lineup, everyone here coalesces into a unified group and navigates every twist and turn with precision. Yes, of course this is an album straddling the line between dead serious and goofy (the goofiness cannot be understated here), but if you don't find it too off-putting, there's a lot of fun to be had here.