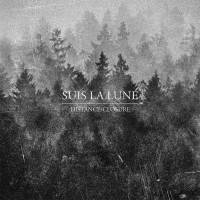 Suis La Lune are back and following up on 2012's Riala pretty smartly. As much as they touted this EP as one that's darker with a harder sound, I found the aggression toned back and tempered with a lot more moments of beautiful riffage than I expected. Does Distance/Closure disappoint? Of course, not. There's much more technical instrumentation at hand but the band still keeps their essence going, sounding like Suis La Lune are expected to. This definitely reiterates to post-hardcore/screamo fanboys such as myself just how much they influenced bands like Pianos Become The Teeth and The Saddest Landscape.

The four tracks clock in at around 25 minutes and the length could prove a bit testing. However, it's the post-rock charm of the guitars which blend so well with the passionate, frantic vocals that create a great mix to keep you hooked. "Different Perspectives" and "Endless Cycle" are examples of this, with tender melodies building a quiet-loud-quiet dynamic that once more, cuts back on the noise and rage I anticipated. I thought they'd be harder and much more angry out the gates but the way they technically move you is really worth the pick-up.

These guitars are definitely what bands like Dance Gavin Dance and A Lot Like Birds take lead from. They intertwine and explode with great effect and even as the closer ""Within" slows proceedings down, you're left with a constant reminder that Suis La Lune are a band that can afford risk, experimentation and do whatever they want because they've got the creative guile and musical intuition to mix genres while still pulling off their own style quite well. They've influenced quite a few bands on the post-hardcore/screamo scene and it's amazing to see Suis La Lune still evolving. This EP feels like a detour from what I'm accustomed to but still, there's a big sense of familiarity as you journey down this side-street.

All Out Panic: The Insanity Of Modern Life Continues