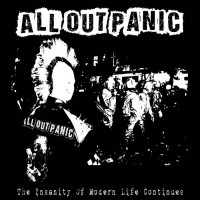 The Insanity Of Modern Life Continues (2015)

I discovered Vancouver hardcore punk band All Out Panic while listening to the very excellent Rocket From Russia podcast; I immediately froze as my ears absorbed the ripping track â€œPanic Attackâ€ from one of the bandâ€™s earlier releases. Unfortunately, it appears I arrived a little late to the party as All Out Panic have recently called it a day. Nonetheless, I picked up a digital copy of their last recording, The Insanity Of Modern Life Continues, and let it rumble around my stereo a few times.

Make no mistake, this is punk rock with a capital P. If you prefer some of the more modern, mid-tempo stylings du jour, you probably wonâ€™t enjoy what All Out Panic have to offer. Absolutely frantic riffs and beats dominate a presentation of ten songs in 21 minutes, not far off from the likes of early D.R.I. or The Exploited. What impressed me most was the speed of the players; every song sounds like itâ€™s about to fly off the road as the band stomp their gas pedal through the floor. The snare beat banged out on â€œDrone Strikeâ€ is one of the fastest Iâ€™ve heard in a while. Another strength of this album is the recording quality; these songs sound great! Sometimes I find myself less inclined to enjoy bands who go for the throwback approach and record things that sound like a demo -- on purpose -- because they want to make it seem as if itâ€™s really 1982, but this isnâ€™t the case here.

One of the shortcomings of The Insanity Of Modern Life Continues would have to be the runtime; I love fast songs that clock in around the two-minute mark, but I think maybe another two or three rippers would have really helped towards the end. Also, while I believe the vocal style used by the band is the correct one, itâ€™s about the harshest my ears like to go and will make me spin the album a little less frequently than others in my collection.

Overall, this is a solid effort for those who enjoy their punk served fast, hard and unforgiving. And while All Out Panic may have packed it in, itâ€™s still good to see modern acts keeping traditional punk up to date.