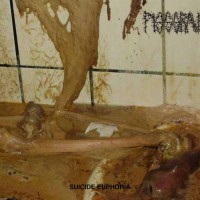 I first listened to Suicide Euphoria with an upset stomach and, boy howdy, that was a mistake. If you're going to listen to this album, may I suggest going for a brisk jog in a summer drizzle first? Perhaps eat some crisp fruits and veggies. Take a day long shower. Basically, start off as clean and fresh as possible, because this album is going to drag you down into the filthy muck. It's going to grab you with it's dirty paws, take hold with it's filthy fingernails, and pull you down as far as it can.

Pissgrave do a great job of warning you just how gross sounding and heavy this album will be. If the disturbing album art or the band's name don't turn you away, then maybe the first 30 seconds of blasting fury on album opener "Perpetual War" will scare you off. This album was made purely for fans of grinding death metal, and the band makes it abundantly clear that everyone else can sit this one out. However, one can only take slightly different shades of brutal aggression for so long, so luckily Pissgrave keeps things concise to prevent the album from sounding too boorish. Yet, by the time closer "Blood Fog" rears its ugly head, it all sounds like a liquified mess comprised of component parts of previous tracks. The album makes a strong, memorable first impression before coming to a halt with a mediocre finish.

Despite the sloppy album cover and the band's juvenile name, Pissgrave are quite adept at the style of death metal they're pushing here. If you listen to a Cannibal Corpse record through speakers caked with wet mud, it wouldn't be too far off from this album. When the band ventures down a jagged, rapid groove, every band member is in lockstep, working in unison to punish the listener. The vocals are delivered with a dirge-like growl that seems at home with the extreme instrumentals. The guitar solos (like the brief, but effective shred on "Pain Enchantment") are knotty and gritty, pushing your face further into the disgusting bile. Despite the sloppiness implied by the song titles, band name and album cover, Pissgrave themselves play as a fairly tight unit. Not too shabby, given they are a relatively young band with only one previous release (a demo cassette) to their name.

Pissgrave don't so much create their own style as take a standard death grind approach and slather it in their own special sauce. That sauce just happens to be disease ridden, repugnant, and sickening. It also hits the spot if that's what you're in the mood for.