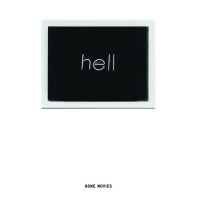 Home Movies remind me of a lot of things. Formerly Stanley and the Search, The band's sound ranges from pop punk to alternative and pop rock, yet the band ties all these sounds together in an original fashion. Much of their first EP, Hell is a reminiscence of bands from the early 2000s like Armor For Sleep, Acceptance, and many other pop punk/pop rock bands with formal elements of that aesthetic in mind. Hell is a heavily driven pop rock album on the verge of other genres that sound heavily influenced by the previous generations pop punk and alt. rock.

Each track on Hell is crafted differently but maintains a similarly unified sound that represents the bandâ€™s overall approach. With five songs, the band provides just enough to get inside their pop rock roots, which makes up the composition of the EP. Lead singer, Dominic Padilla has an extremely wide vocal range that allows him to adapt to the many different melodies on Hell.

The sound quality of the recordings is extremely crisp, using its ability to pick up on the harder hitting notes and keeping the drums sounding clean and fresh the entire time. Producer, Kyle Black did a great job rounding the EP out. The recordings truly do sound massive. Johnny Liu is a fantastic drummer that brings his beats and fills to the forefront of the group, at times even outshining the rest of the band.

The bandâ€™s sound is extremely mature but still manages to fit the mold of other pop punk releases. Songs like â€œThe Will of Fireâ€ will definitely appeal to pop punk fans with its intense melodic energy fitting well into the genre, new and old. Every song on the EP has this intense melody but it is often channeled other ways creating a variety of energy thatâ€™s packed into 16 minutes. The closing track, â€œFickleâ€ is a fast carried melody thatâ€™ll sure to leave listeners waiting for the bandâ€™s next release.

Home Movies sound is hard to put a finger on to say the least. Their catchy melodic mature sounding brand of pop punk is enough to delight fans of bands like New Found Glory and The Story So Far. The bandâ€™s pop punk aesthetic blends well into their more pop rock sound creating a fusion that will interest you whether you grew up with early pop punk or if youre in the pop punk millenials, Home Movies has plenty to offer with Hell.