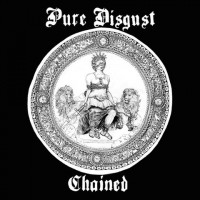 Pure Disgust hail from Washington D.C., an area that's positively oversaturated with hardcore legend and circumstance. It's easy to find yourself asking, "Oh, do they sound like Bad Brains or Minor Threat?" They sound like neither, as they have more sonic aspects typical to early '80s bands from Michigan (The Fix, The Meatmen) and South Carolina (Bored Suburban Youth). With Michigan and South Carolina hardly even being footnotes in the American hardcore lexicon, it would be easy to see these bands as being comprised of enterprising young upstarts without a formative scene to call their own. Pure Disgust carry on the spirit of those bands, sounding disaffected with being considered outsiders, despite the fact that they come from an area vital to the genre.

Of the previously mentioned bands, Pure Disgust inherit the cleaner guitar sound of The Fix and the angry vocals of Bored Suburban Youth. While sounding wholeheartedly nostalgic, it is a bit of a comfort to hear this guitar sound in hardcore again. The now standard blown out distortion so prevalent in the genre today can get bland fast if not creatively utilized, so Chained is awfully refreshing in that respect. Pure Disgust are clearly more in debt to the punk side of the genre, with the first song proudly declaring "I don't owe you shit" repeatedly. Standout track"Guilty" takes a simple Oi! stomp and executes it perfectly. The EP's six songs, each under two minutes, make their point quickly and exit with no fuss.

Lyrically, race issues are front and center, with songs like "Race Riot" and "Caged Profit" being as upfront as possible with the band's point of view. Such honest social criticism only adds to the old school hardcore punk aesthetic Chained is steeped in. Anyone who misses that approach will be remiss if they let this EP fly under their radar.

Check out the EP here.