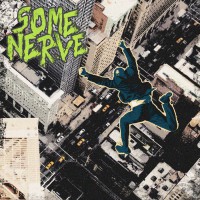 Some Nerve is an up and coming hardcore band from Houston, Texas that released their self-titled full-length during the summer of 2014. But Some Nerve isnâ€™t just a hardcore band that plays a few fast chord progressions with a just as fast rhythm section like some knock-off Circle Jerks band. Instead Some Nerve has taken a much more updated approach to the subgenre and you can definitely hear it on this record. With hardcore as the bandâ€™s base sound, they mix in some crust punk and metal influences to it, which is what makes this band and this record in particular stand out quite a bit.

In songs like â€œWhat We Donâ€™t Seeâ€ you can hear a lot of the crust punk and metal characteristics that the band infused into their overall sound. The guitars are crunchy and together they harmonize with each other for the solos. The lead singerâ€™s voice is this deeper and raspy semi-melodic yelling. And on this track and through out the album the backing vocals are these big chorus-like yells that add so much more charisma the songs.

The most stand-out song is the very last of the 12 tracks and it is titled â€œRebellion.â€ Interestingly, it is also the shortest (almost criminally short). Itâ€™s songs like this that should give us all hope that punk rock is nowhere near dead. â€œRebellionâ€ has a lot of the same crust and metal features you hear through out this album, but this time around the treble-heavy and distorted bass is what carries the song, while the guitars come in to follow along and break out a shredding guitar solo towards the middle. The lead singerâ€™s voice is just as angry during this song, if not more so and the backing vocals are like this big wall of yells that hit you without mercy. But what really makes this track stand out from the other eleven is its anthemic demeanor. The music in this song really personifies a rebellion. Itâ€™s the perfect sound track for one.

If youâ€™re looking for something new in the hardcore subgenre that is unique and has some really well thought out musicianship, you need get Some Nerve on your radar.