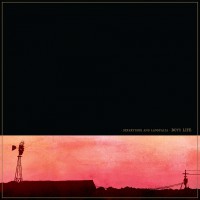 It's no secret that when it comes to purist Midwestern emo from the '90s, one of the bands that immediately jumps to mind is Boys Life. When you think of them, they're right up there alongside bands like Mineral, Kid Brother Collective, Texas is the Reason and Christie Front Drive. They also impacted so many bands plying their emo trade today and whether these bands would admit it, you can clearly see how Boys Life imposed their sonic signature on modern show-runners. Departures and Landfalls isn't just a welcome reissue but with the band reunited, playing shows and expected to release new music, it all fits given that over the last couple years, there's been such a resurgence in the genre. It's great to have one of the pioneers back is all I'm trying to say.

This record in particular speaks volumes. The garage-grainy feel, the demo vibe and overall atmosphere created by the swath of distortion, reverb and lo-fi guitar cuts all create this raw sense of melody that is made for all Boys Life's dark-corner poetry. Trust me, it's stereotypical emo a la Sunny Day Real Estate at times (as on "Fire Engine Red" and "Twenty Four Of Twenty Five") but then there are sharp turns like "Calendar Year" which draws comparisons to At The Drive-In - unsurprising given how much the band's always touted Fugazi and Drive Like Jehu as influences. Point is, amid all this sombre emo dramatics like "Radio Towers", they mixed things up well enough so that they didn't pigeonhole themselves into too many slow, depressive burners. This record is a key lesson in the genre's history and as nostalgic as it is, it will always be applicable to any era of life because of its emotive draw. An emo classic.

The Flatliners: Division of Spoils