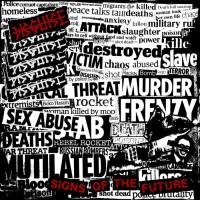 Owing a healthy debt to genre forbearers like Disfear and Crucifix, Dublin band Disguise play prototypical D-Beat covered in a thick, muddy hum. The band doesn't try to break new ground, but settle for stomping all over it instead, kicking up dust into the faces of anyone who'll listen. The music matches the cover art pretty well, with visions of violence drenching this lo-fi, homemade affair.

The first track "Constant Victim/Signs of the Future" attempts to pull the rug out from under the listener, opening with compressed feedback before surprising you with the band's heavy sonic attack. The move from deeply lo-fi to slightly less lo-fi does not do the production any favors, emphasizing it instead of downplaying it. The screeching noise bleed of the guitars and echoed vocals don't ruin the music, but the band makes a misstep by drawing attention to the shoddy production values. Disguise would have been better off launching into the track immediately and actively displaying their no-nonsense approach.

Disguise peddle bite sized, intense sludge that bludgeons the eardrums. Rightfully, they keep this EP short, with most songs hovering around the one minute mark. Unfortunately, this means tracks like "Power Conspiracy" and "Electric Pollution" aren't able to distinguish themselves all that much, both sounding like middle of the road hardcore thrusts. Closer "B.B.F.W." finds the band pushing a groove a little more intently and the track is better because of it. Sporting a more lengthy running time, the track has the band locking into each other without losing too much of the intensity that the other songs display. Hopefully this means the band will stop emulating typical D-Beat tactics and begin forging a path of their own in the near future.

Listen to the record here.

The Good Life: Everybody's Coming Down