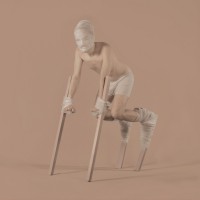 Ã sporum annarraopens with a recorded church prayer, building an eerie habitual aura out of sampled religious vocal chanting the same way The Body did on their 2010 album All the Waters of the Earth Turn to Blood. Album opener "Ãžitt rÃ©tta eÃ°li" highlights the band's uncanny ability to build an atmosphere. However, at a bloated 6 minutes, it also demonstrates their inability to maintain it. The track builds nicely, plateaus and continues to spin it's wheels, limping to a finish about two minutes too late. Throughout Ã sporum annarra, Logn try loftier tactics to preserve attention. The results are decidedly mixed.

Logn's band name roughly translates to "calm" and, would ya know it, they don't sound calm at all! The band channel No Heroes era Converge with their screeching post hardcore guitars and pummeling drum waves. Traces of grindcore and metal can be detected, particularly in the album's fierce second track, "FÃ³rnarlÃ¶mb."

At times Logn's songwriting seems scatterbrained, jumping from one section to the next and stopping for the sake of flexing dynamics. It can be thrillingly jarring at first, but it's a trick that loses luster quickly. The real pleasant surprises come when the band are able to jam two distinct rhythms together without missing a beat.

Though the songwriting needs some polishing, the band are quite adept at mixing genres. They don't so much switch from one extreme genre to the next as much as they mix them all together in a sharply controlled maniac stew. The band hit their high points with a thunderous intensity, slowing down only to throw a curveball at the listener. The album's title track hints at a brighter future for this band; a future where the band can pull off their notty post-hardcore excursions with rigor and pointed attention to detail.

It's encouraging that a band with solid technical talent can push themselves into more experimental sonic arenas without losing intensity. Tracks like "TÃ³m hamingja"Â prove that Logn can simply shovel out furious riffs at an intense speed and call it a day, but they aim much higher than that. They don't completely fall on their face, but they stumble while swatting at their goals. Hopefully the next record sees them approaching their ambitions with a more assured stance.