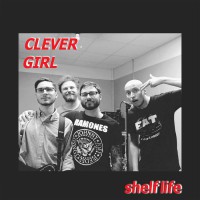 In 2012, atop my Punknews year-end list stood This Is Your Life -- a five-piece melodic hardcore band from Richmond, Virginia. While I still harbour small hope that someday they'll come back into the musical fold from hiatus, Clever Girl is an offshoot of this band but one that's skewed to the more aggressive pop-punk end of the spectrum. Bits and pieces of the former band crop up here and there in what proves a risky yet impressive payoff. Shelf Life does feel like an album in the budding stage but given how well they've cut their teeth here, I'm eager to see where this goes.

It's a hell of a spunky album for sure. Feisty yet tongue-in-cheek a la Joyce Manor and State Lines. But as I said, it's much more jacked up in terms of shredding guitars and frilly solos as opposed to generic three-chord pop-punk structures. "Dried Up" opens up in the latter vein of things to show some of the new but it's where some of the old pops up that I'm taken aback. "Thompson Park" rips just like the TIYL days and I was left wondering why they didn't differentiate it a bit more. Not that I'm really complaining as their gang-vocal approach really proved a big positive as well to show how well they mix things up. "None of My Old Band Shirts Fit Anymore" also adopts this grittier approach and it's how dynamic the guitars cut which stands out. I can see fans of A Wilhelm Scream, Trophy Eyes and Worthwhile really digging what's on offer instrumentally.

But ultimately, it's a new RVA chapter being written here and you can see the breakaway from the shackles of old on "Decade". It feels like a mash-up of Lifetime, Stickup Kid and The Wonder Years all smartly fine-tuned to pave a way forward for a band that does decently enough at carving out a sound they should be able to hone and call unique in a year or so. I'll definitely be keeping tabs on them and in the interim, Clever Girl's Shelf Life will definitely suffice. It feels like a right step forward.