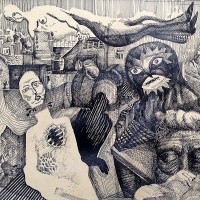 mewithoutYou are one of the most polarizing and opinion-provoking bands I know. I've always dug the vast majority of their works and when it comes to picking one out the bunch, it's 2012's Ten Stories that sits with me the most. It felt like they charted some slightly newer ground but still one worn with very familiar grooves. In terms of musical landscape and comparison to the other full-lengths in their catalog, Pale Horses manages to trump its predecessor and run ahead of the pack. Why? Well, it honestly feels like a comprehensive round-up of everything I've ever loved about this band, in that it picks and chooses all their best traits off each release. This, their sixth full-length, smartly assembles all these strong-points, smartly so at that, and offers up yet another batch of Aaron Weiss' concepts that feel, yet again, like an album that returns to their original form, but one that does enough to be considered risque and a step outside any comfort zone they may have established in the past.

Several things stand out on Pale Horses. The first is that it doesn't dance around a commercial sound as much as the last record did. I expected more along the lines of "Cardiff Giant" (which wouldn't have been such a bad thing at all) but this time around, mwY portray themselves as much more sectioned off in terms of album arrangement. A lot of tracks have that air of slow builds transitioning into brief explosions of aggression, which Weiss' lyrics spin big moments of catharsis on. And he's as cryptic and mysterious as ever. In terms of tracks that exemplify this slow-loud style, "Blue Hen" starts off with a Tool-esque riff and eventually flows into "Lilac Queen" to add a neat balance to the album. Each has a nice ebb-and-flow, complementing each as they hammer at each other back to back. Of course, all of this is helped by the spoken word of Weiss. His wordplay treads on religious undertones, misery and surreal states of mind but with a consistent chemistry made to move you. Powerful stuff, indeed. While these songs intertwine bits and pieces of intricate picking and heavy distortion, mwY really kick things up a gear on "Birnham Wood". This song has the strongest sense of urgency and feels like the record's most intense track. These all put the band's musical balance (in terms of style and delivery) in the spotlight but I'll admit I really wanted more mixed/shouted vocals. And more turning up the noise.

Switching gears to the darker, melodic aspects of Pale Horses, then look no further than "Pale Horse". Weiss feels more subdued than ever on this and this stance really does manage to dictate a lot off the 11 tracks at hand. The free-range vibe, haunting drums and overall, murky atmosphere, really make for an intimidating opener and it's here that Weiss eerily imposes himself. Where they sacrificed their poppier/catchy components (and they did so a lot), Weiss allows his theatrics and thought-prodding poetry to push forth even more and stab at the listener. All his words are up for interpretation as one would expect but it's the progressive nature of the musical arrangements that really allow everything to sink in. "D-Minor" in its pianos and "Magic Lantern Days" further bring this spacey vibe, giving you time to breathe and ingest. The latter's an acoustic with tight percussion that's ironically the only track I'd call accessible or anything near mainstream. Yet somehow, they manage to work their eclectic nature into the song, making it ambitious and not just a cookie-cutter track. On that note, it's a huge plus that there's very little filler. I often found their concept albums to have a bit too much of this but here, they rectify things nicely, no matter how far they veer from the original sound I associate them with.

Lastly, you've got the more direct post-hardcore characteristics of Pale Horses on "Mexican War Streets", which throws back to the recent album from Take One Car. I jumped back into that album and realized that they felt like a little brother to mwY which got me thinking how many bands Weiss and co. are influencing these days. There are a lot of subtle influences coming off on indie bands and this is just one of them which further got me thinking how mwY are now a band that's so traveled and grown. I remember listening to them when they weren't anything big as yet and often thinking how distinct they sounded. These songs do well to remind us that this appeal's still here and in doing so, they emphasize how good a sequel this is to Ten Stories. Will Yip's production is top-notch and it's no surprise how much the band's instrumentally on point. Run For Cover definitely pulled off a major coup in putting this out because mwY, despite their experience, are expanding their horizons. Growing. Developing. Penning more as they learn. Painting musical collages which exponentially grow in scope as Weiss drifts off with each passing day.

mewithoutYou once more have put out a unique assortment of tracks and as the organs hum on "Rainbow Signs", the slow burn sets in, mixing slick solos into a huge finale, and reiterating that when it comes to this odd band of storytellers, whether you're an introvert or someone out there making noise, mwY is nothing short of a big experience. And more so, they're an adventure.

Donovan Wolfington: How To Treat The Ones You Love