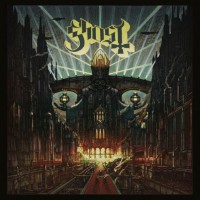 Iâ€™ll be the first to admit that when I heard Ghost for the first time, I reacted like a lot of people do when I introduce them to the ghoulish sextet:

What the fuck am I hearing?

The questions that follow are basically just different variations of the former: Flip the jacket over â€œWhat year did this come out? Wait, 2010? How?â€ Open the gatefold â€œHoly shit, this is what the band looks like?â€ what follows is a litany of additional inquiry, followed by a reluctant stare while your best friend bores you with the mysterious bits and pieces of information on the why and how and the â€œmaybe but maybe notâ€ that make Ghost such an attractive anomaly, not just in the metal scene, but across all musical boundaries. Not everyone comes around on Ghost. But those that do, it quickly becomes a very real obsession.

Which is why Meliora is such an important album for fans of Ghost, as well as the band themselves. Anticipation and hype can be crippling for an album like Meliora. Basically, Ghost have created their own shiny new sub-genre of metal, and very quickly legitimized their efforts by releasing two very solid, well executed, well received albums (2010â€™s Opus Eponymous and 2013â€™s Infestissumam). From the moment they first donned their faceless masks and Papal in 2008, to the announcement of Meliora back in May, Ghost has gone from â€œword of mouthâ€ to a full blown cult. And that cult has been chomping at the bit to get their hands on this record. Even people who canâ€™t stand the hype that Ghost has generated are going to pick up this record. Theyâ€™re waiting patiently to dissect and interpret every note, every melody, every lyric. For better or worse, Meliora will be the first of their material to be highly scrutinized by both supporters and naysayers, all of which can be attributed the hype that Ghost themselves have crafted since their genesis in 2008.

That being said, I fucking love this record.

Meliora feels like the best of both full lengths that came before it, while seamlessly treading new waters throughout the 41 minute effort. Keys and Choir are no longer just the salt and pepper; theyâ€™re blanketed throughout every song, mixed in seamlessly. Every chorus is packed with harmonies and orchestral arrangements, all of which feel appropriate and not just misguided overproduction. Meliora has some of the most brutal and sinister guitar riffs the nameless ghouls have conjured to date, while inversely arranging some of the most eloquent compositions that could easily share a table with the likes of compositional juggernauts like Yes and ELO. Not surprisingly, what makes the cacophony of bells and whistles on Meliora come together so well is that if you were to pull it all out of any given track, you still have a great Ghost song at the base. The foundation of what makes Ghost GHOST shines through the entirety of the album, and is never overshadowed by the vision it projects.

Highlighting any track in particular is pointless. Meliora plays out very much like a Broadway musical, complete with emotional ebbs and flows, conflict, climax, and resolution. I truly felt like I was listening to the soundtrack to a musical that I wish I had seen prior. The track listing feels very intentional and meticulously thought out. The singles that preceded the album ("Cirice," "From the Pinnacle to the Pit," "Majesty") certainly stand their ground on their own, but placed in context of the album very much elevates the mood and texture of each track.

The production is tight and clean, easily the most aurally accessible to someone hearing Ghost for the first time. The mix pumps the breaks and accelerates at all the right moments. Donâ€™t get me wrong, the more throwback mix of Opus (Gene Walker) and the heavy, aggressive production of Infestissumam (Nick Raskulinecz) were appropriate and necessary, but Meliora felt like a sophisticated effort made more so by the tight production, aptly handled by Klas Ahlund (just look these guys up, seriously).

People who love Ghost are going to enjoy this record. Those who â€œjust donâ€™t get itâ€ are going to wave it off and listen to the new High on Fire record (which is a great fucking record), although a favorable amount will join the cause. For people hearing Ghost for the first time? Not a bad place to start.

Did I have issues and hang ups with this record? Of course I did. But itâ€™s a damn good listen, and Iâ€™ll pander as much as I want.

Bleach Everything: Free Inside [7-inch]