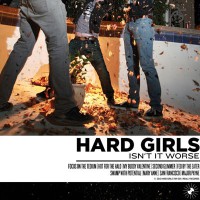 I finally gave Hard Girls a listen when they released their highly acclaimed (deservedly so) 2014 release A Thousand Surfaces. Blown away by the frenetic, enthralling punk energy captured on that record, I worked my way back through Hard Girlsâ€™ discography and related releases: other projects, solo work and the like. This was easy enough to do; most of these albums were (and are) still available at a pay-what-you-want donation price on the Quote Unquote Recordsâ€™ album store.

Isnâ€™t It Worse? shows the slightly rougher, weirder, earlier side of Hard Girls -- specifically, there are more clear elements of membersâ€™ other bands, Shinobu and Pteradon. It certainly makes this less of a cohesive punk sing-along record than Surfaces, but it gives the listener a hell of a lot more to chew on. Fans of Shinobuâ€™s weird, lo-fi guitar noodling will feel a lot more at home on Isn't It Worse?; likewise, if you enjoyed the gritty, hoarse feel to Morgan Herrellâ€™s songs on Pteradonâ€™s Viva, this one will be a gruff classic.

Every track on Isnâ€™t It Worse? has a distinctive sound that tends to uncannily match the subject matter. â€œSecond Glimmerâ€ is a goofy love song, and it ambles along romantically, the verses sounding a lot like the awkward lovers walking that Herrell describes. â€œFed by the Eaterâ€ is a silly piece on faux addictions and drugs, with references to getting high on espresso beans, getting drunk on orange juice, and being addicted to My Little Pony. The music sounds like an aural manifestation of a hangover, and it works perfectly. â€œFocus on the Tedium,â€ the album opener, has feverish guitar and bass lines leaping throughout to perfectly match the absurd chorus: "Shit pizza/ shit food/ shit life." â€œMary Anneâ€ and â€œSan Franciscoâ€ are as close to acoustic/ drum-less ballads as Hard Girls get: a little maudlin, but earnest and realistic, and still with elements of their weird punk leanings. My favorite track is easily â€œMy Buddy Valentine,â€ a dissonantly silly rocker that gets absolutely stuck in my head.

Ultimately, the best part about listening to Hard Girls, especially on this record, is the interplay between guitarist/vocalist Mike Huguenor and bassist/ vocalist Morgan Herrell. Herrellâ€™s grinding and often heavily distorted bass lines hold down much of the space usually reserved for rhythm guitar, allowing Huguenor to explore bizarre, quirky lead lines that somehow always fit. The same can be said about the band vocal dynamics; much like juxtaposition of Brendan and Chris of the Lawrence Arms, the hoarse, throaty feel to Herrellâ€™s voice is the perfect match for the higher, nasally croon of Mike Huguenor. The sum is certainly greater than its parts. Thereâ€™s always so much going on itâ€™s easy to forget this is a three piece.

Isnâ€™t It Worse? is a stellar record that is pretty difficult to fit in any genre, and I find it hard to make a whole lot of comparisons that aren't in the band's family tree. Itâ€™s much more accessible than most of these previous releases, but a little bit more complex and lo-fi than A Thousand Surfaces. For me, this is a great place to continue a growing obsession with a band that I ignored for way too long.

Rubrics: What is the World Without Rubble?