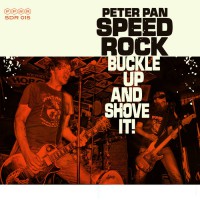 Peter Pan Speedrock is a Dutch trio that has been around for nearly 20 years and has quite a few albums under its belt. This is my first exposure to the band, and I've got to say, I like what I hear. Buckle Up and Shove It! was released in Europe last year, and thanks to the good people at Self Destructo Records, it's finally seeing the light of day in the US. This is actually not as fast as I anticipated. I was expecting something like Zeke or the early stuff by label mates Against The Grain. It's more like the raunch and roll of Motorhead or Nashville Pussy. In other words, it's fast, but not crazy fast.

Opening track, "Get You High", gives you a good idea of what to expect the rest of the way. Driving, riff-heavy rock and roll with lyrics that aren't going to win any poetry contests. While the words might not stimulate your mind, the music will almost certainly make your body want to move. "Bad Things", "Wide-Eyed and Thirsty" and "Doin' the Nasty" are all best taken at face value. Most of the songs, including the title track, have the type of hooks that will have you singing along in no time. PPSR's revved up version of The Damned classic "New Rose" stays mostly true to the original.

There's something inherently likeable about Peter Pan Speedrock. Maybe it's their awesomely awkward name. Maybe it's their complete lack of pretentiousness. Maybe it's because they play with a joyful abandon that American bands are afraid to for fear of appearing uncool. There's a song in the middle of the album called "Loose Women and Loud Guitars". If either of those thing appeal to you-you'll probably like this. Check out Buckle Up and Shove It!, it might just make you smile.